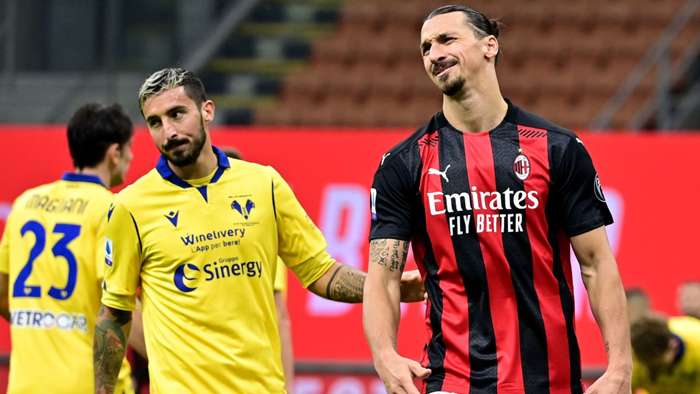 Zlatan Ibrahimovic has taken himself off AC Milan penalty duty after missing his thirdspot-kick of the season on Sunday.

The Swedish veteran's 66th-minute miss didn't defeat Milan, whorecovered from an earlytwo-goal deficit to snatch a point, with Ibrahimovic rising highest to nod home in the dying stages of the Serie A match at the San Siro.

Ibrahimovic has now failed to convert four of his last six penalties, with the 39-year-old admitting that he would give the next spot-kick to team-mate Franck Kessie.

"I am angry, obviously, because a draw today is not good enough,"Ibrahimovic told Sky Sport Italia.

"We had so many chances, I missed a penalty and I think I’m leaving the next one to Kessie! That would be better.

"We conceded two goals, got two back, we go forward and the important thing is not to lose our confidence. Considering the way the table is now, we want to win every game."

Despite the result, unbeaten Milan remaintop of Serie A, heading into the international break with a two-point lead over surprise package Sassuolo.

With their next league fixture coming on November 22 away at Napoli, Ibrahimovic admitted he was looking forward to the upcoming break to rejuvenate his body.

"There are many games now and when you get tired, you are not always at 100 per cent," he said.

"Fortunately, the break for international duty is here, because I need rest. I didn’t have the sharpness and usual determination I have in front of goal. I just felt like I wasn’t all there.

"We have to play for objectives, we can’t just go out there and be happy to play. At least I can’t, it’s not my philosophy."

Milan's hot start to the season has been a surprise, with likely contenders Juventus, Napoli and Inter all having inconsistent campaigns so far, and Ibrahimovic feels the Italian top flight is currently an even competition.

"I see more teams now that are fighting for higher up the table and it wasn’t sides like Atalanta in the past," Ibrahimovic said. "I’ve played in many countries and I can confirm Italy is the toughest for strikers.