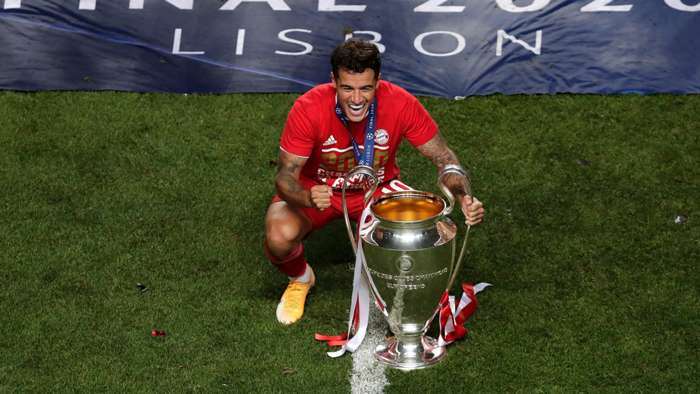 Champions League winner Philippe Coutinho has returned to Barcelona following his loan spell with Bayern Munich, with his future still very much up in the air.

The German giants, who defeated Paris Saint-Germain in the European Cup final to secure the treble, decided against making the 28-year-old's temporary move a permanent one despite his impact in the final weeks of the season.

Indeed, Coutinho appeared as a second-half substitute in all of Bayern's last four matches in the competition, with him even scoring two goals against parent club Barcelona in the thumping 8-2 win back in August.

And in a statement released on their official website, the Bundesliga champions thanked the Brazil international for his contributions, with Coutinho making a total of 38 appearances for the club in all competitions, scoring 11 goals and claiming nine assists.

“We want to thank Philippe Coutinho very much. With his creativity and excellent technique, he enlivened our game in the trebleseason," CEO Karl-Heinz Rummenigge said.

"His performances in the Champions League especially proved that it was a good decision to have him on loan. We all wish Philippe all the best for his future career."

Sporting directorHasan Salihamidzic added: "Even if FC Bayern and Philippe Coutinho part ways after just one season, his involvement in Munich has made it clear what an excellent player he is.

"Unfortunately, due to injuries and an operation, he couldn't be used more often but he can rightly be proud of his contribution to the treble, especially at the Champions League final tournamentin Lisbon. All the best for the future, Philippe!"

Coutinhois now back with Barca,having missed the initial pre-season medical tests that were undertaken by many of the first-team squad on Sunday.

Despite the former Liverpool midfielder's presence in Spain, however, it's anything but certain that he'll be part of Ronald Koeman's squad for the 2020-21 campaign.

Barca have made frequent attempts to offload the South American as they seek to free up funds and reduce their wage bill, with Coutinho one of the highest earners at Camp Nou.

Indeed, the Catalan giants have attempted to sell the player to a PremierLeague club, with his agent Kia Joorabchian having explained how a switch back to England would be of interest.