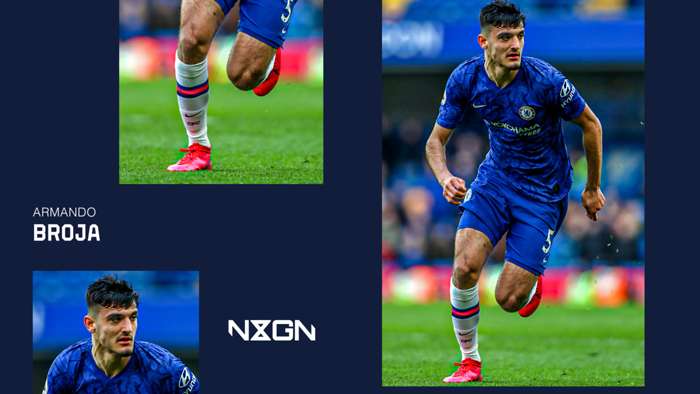 The path between Chelsea and Vitesse is a well-trodden one.

The Blues' arrangement with the Eredivisie side is no secret. Each year at least one young player from Stamford Bridge is sent on loan to earn first-team minutes in the Dutch top-flight.

It is a relationship that has borne fruit for both teams. Mason Mount, Nemanja Matic and Dominic Solanke have all gone onto become full internationals following their spells at Vitesse while Matt Miazga and Lewis Baker were part of the Vitesse side that won the KNVB Cup for the first time in their history in 2017.

The latest Chelsea youngster to be sent to further his footballing education in Arnhem is striker Armando Broja, who completed his season-long loan move to Vitesse earlier in the transfer window.

Broja, 18, has already scored two goals in his first two friendly appearances for his new club, and a memorable off-season could be about to get a whole lot better after earning a first call-up to the senior Albania squad for their upcoming Uefa Nations League matches.

A suspension carried over from a red card in his last outing for his country's Under-19s will rule him out of Friday's clash with Belarus, but a debut could be on the cards on Monday against Lithuania.

Broja was born in the Berkshire town of Slough to Albanian parents, and began his footballing education at local amateur club Burnham Juniors.

Having previously had trials at Reading and Fulham, he was just six whenTottenham took the decision to enrol him into their youth structure despite having come across Broja by chance.

"I went to a tournament with Burnham Juniors and there was a Spurs scout there watching,"he told Chelsea's official website.

"He actually came to watch another player in my team but I ended up winning Player of the Tournament and he took me on instead, so I went to Tottenham and signed for them."

Broja would, however, remain in north London for just two years before swapping Spurs for Chelsea following a number of impressive performances against the club he supported as a boy.

"I was at Spurs for two years from U8s until the end of U9s," he added. "In those two years, we played Chelsea a lot and they really liked me as a player. That’s when I joined the academy."

Broja's mother would regularly make the 50-mile round trip to drive her son to training and matches in Surrey, though there were times that it seemed that the pacey forward would not break through.

Having signed on as a first-year scholar in 2018, Broja spent much of the campaign on the bench for the club's U18s.

During the following campaign, however, he began to showcase his true talents, scoring 19goals in 31appearances between the U18 and U23 sides.

Having signed a new two-year contract in January 2020, he made his senior debut a month later as a substitute in a 4-0 win for Frank Lampard's side over Everton.

That remains his only first-team appearance to date, though he hopes to do enough at Vitesse to persuade Lampard - who now possesses a fearsome forward line following a busy transfer window - to offer him more opportunities upon his return to England.

"I moved to the Netherlands for a year because another striker has signed for the first team of Chelsea," Broja told reporters, citing the arrival of Timo Werner at Chelsea.

"It's good for me too because I'm still young.In the Netherlands with Vitesse the first-team training is going very well and I am there for a year.

"If I do well there, perform well and score lots of goals, I will return to Chelsea and have the opportunity to join the first team and also play in the Premier League."

Broja will be hoping to emulate his footballing hero, Ronaldo Nazario, during his time in Eredivisie, with the legendary Brazilstriker having scored 54 goals in 58 appearances for PSV before leaving for Barcelona in the mid-1990s.

The teenager was regularly shown YouTube videos of the former Real Madrid and Inter star by his father, Xhevahir, and given his pace and physical stature, Broja has all the attributes to himself become a goalscorer of some repute.

He also citesChelsea legend Didier Drogba and five-time Ballon d'Or winner Cristiano Ronaldo as role models, and if he can match either of their careers then he will do very well for himself.