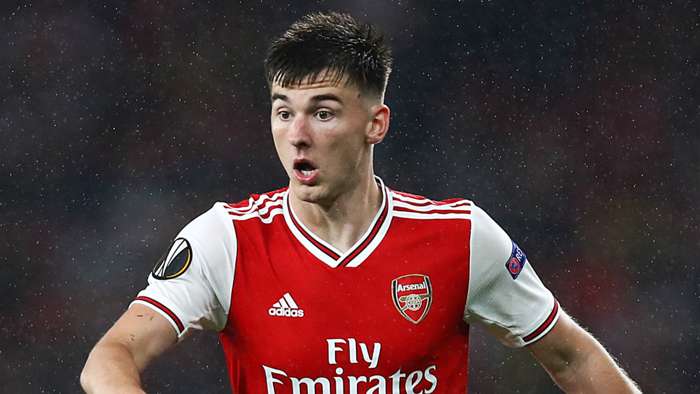 Arsenal left-back Kieran Tierney has returned to full training ahead of the Premier League match against Liverpool on Monday.

Manager Mikel Arteta confirmed in midweek that the Scotland international's groin issue was a minor one and the club confirmed on Sunday that he is back to training normally with his team-mates.

Tierney could be set to return to the first team when his side travel to Anfield to face the reigning champions, who have won both of their league matches this season.

Meanwhile Greek centre-back Sokratis, who has not featured for the north London side since the FA Cup final on August 1, has almost fully recovered from his calf injury and will be back in full training in the next few days.

Arsenal are also close to welcoming 20-year-old attacking midfielder back to normal training after he suffered a shoulder injury in training before his side’s first game of the season at Fulham.

Cedric Soares has been missing from the Arsenal squad for several weeks due to a calf injury but he is expected to return to normal training by the end of the week.

Arteta is still waiting for several players to return to long-term injuries, withCalum Chambers,Shkodran Mustafi,Pablo Mari andGabriel Martinelli all expected to be out for severalweeks.

Arsenal are two wins from two games in the English top flight ahead of the trip to Merseyside. The Gunners beat Jurgen Klopp’s team 3-1 at Anfield last August and followed up with a 2-1 victory at home in July.

However Arteta admits his side are not the favourites to win Monday's match, telling reporters: "They just go for it, every single minute of every game. Throughout the season to do that for 10 months, that’s a massive compliment I think.

"That is a different level. They have done that in the Premier League and in theChampions Leagueas well. And that is why they raised the bar so high. Not only them, Man City as well in recent years.