Arsenal's centre-back dilemma: Gabriel and Saliba in but now who does Arteta sell?

Arsenal's centre-back dilemma: Gabriel and Saliba in but now who does Arteta sell? 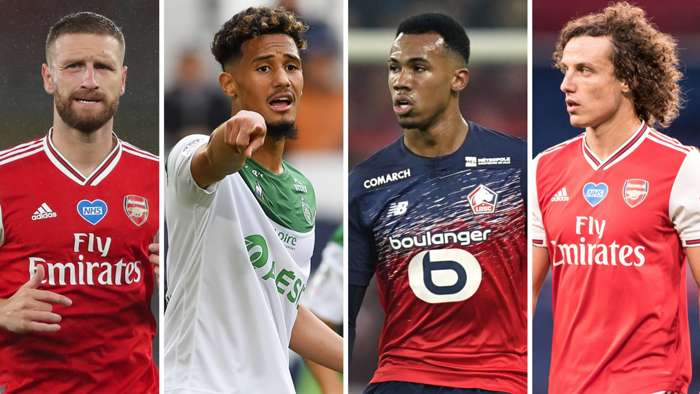 After weeks of speculation and some last-minute twists and turns, Arsenal have finally got their man.

The Gunners scouted both extensively and believe that they have landed two of the best young defenders in Europe.

For Arsenal, the capture of Gabriel is a particularly big coup. They had to fight off serious interest from elsewhere and, at around £25 million ($33m), they have acquired him for what looks to be a very good price.

However, his arrival means that there are now eight centre-backs in Arteta’s senior squad – and that iswithout including Konstantinos Mavropanos, who is spending the season out on loan with Stuttgart in Germany.

For any club, that would be excessive, but for Arsenal, who are desperately trying to reduce their wage bill, it is far too high a number, meaning there will have to be departures before the transfer window closes in October.

Given Gabriel, Saliba andPablo Mari have just arrived, it issafe to say they will all be very much part of Arteta’s immediate plans this season, but David Luiz, Shkodran Mustafi, Rob Holding, Calum Chambers and Sokratis face uncertain futures.

Luiz, though, deserves to stay. Much maligned since he arrived at Arsenal, the Brazilian showed with his performances in the FA Cup semi-final and the final itselfjust how good he can be, especially when playing in a back three.

Arteta is still a huge admirer of Luiz, too, and will be well aware of how important the 33-year-old could be when it comes to helping Saliba and Gabriel adjust to their new surroundings in England.

Saliba, who does not turn 20 until next March, has made just 32 senior appearances so far in his short career, while 22-year-old Gabriel played just 50 times for Lille after moving from Brazilian second tier side Avai in 2017.

Both will need time to adjust to a new country, to a club the size of Arsenal and to the demands of the Premier League. Having Luiz there, not just to guide them off the pitch during their early days in north London but also to ease the pressure on it, will be vital to their development.

“Young players need stable players around them with experience who have lots of leadership,” Arteta said last month. “The way David supports them is very important to us."

And it isnot just Arteta who has spoken about how important Luiz has been behind the scenes at Arsenal. Bukayo Saka has praised the Brazilian for the way in which he looks after the club's youngsters.

“He's a man with a big heart and he just has so much experience in the game as well,” said Saka. "He goes out of his way all the time to advise and help all the young players.

"I'm sure if you asked them as well they will tell you how much he is there to support us. He is a very important member of our squad."

Saka’s view is one that is echoed by Joe Willock. “The player I look up to most has to be David,” said the midfielder.

“Not only is he an amazing player, he’s an amazing person as well. He’s like a mentor and a big brother to me.”

Luiz, then, could have a vital role to play this season. Gabriel and Saliba may look like an obvious pairing, but it must be remembered just how young and inexperienced they are. It would be a big surprise to see both start the season alongside one another in a back four.

The more likely option is Arteta sticks with the 3-4-3 formation fanssaw him use so successfully in the FA Cup final, with Saliba on the right of Luiz and Gabriel on the left.

Arsenal set up that wayas they beat MK Dons 4-1 in their first friendly of the summer last Tuesday, and although neither Luiz or Gabriel were involved, Saliba did play the first half operating on the right side of a back three – and gave an early glimpse of his qualities, not just defensively, but when on the ball as well.

It was an impressive first showing in an Arsenal shirt for the former Saint-Etienne star, but Arteta has already been warning against putting too much pressure on the French teenager.

"I know how high the expectations are on him for next year but we have to bear in mind the age that he is at and what he has done in the past," Arsenal’s head coach said last month.

"I will make sure that we create the right environment for him so that he can keep growing as a player."

Saliba and Gabriel are undoubtedly a part of Arsenal's future, but the same cannot be said for Mustafi and Sokratis.

Both have just one year left on their contracts in north London and would be allowed to move on should offers arrive this summer.

Napoli are showing an interest in Sokratis, but sources close to the player insist he is no rush to leave, despite only making two brief substitute appearances following football’s restart in June.

That shows how difficult it could be for Arsenal to balance the books at centre-back. It isnot just about bringing numbers down, but also about lightening a wage bill that has become something of a millstone around the club’s neck without the riches of the Champions League to rely on.

The Gunners would also listen to bids for Newcastle United-linked Holding and Calum Chambers, who is being eyed by Fulham.

The former Southampton man spent a successful season on loan at Craven Cottage in 2018-19, but has not played since rupturing the cruciate ligament in his left knee last December and has yet to even return to full training.

Moving players on is now a major challenge for Arsenal, who need to raise funds from sales in order to pursue their other transfer targets, such as Atletico Madrid's Thomas Partey and Lyon's Houssem Aouar.

Arteta is overseeing a period of big change at Arsenal and nowhere is that more evident than in defence.