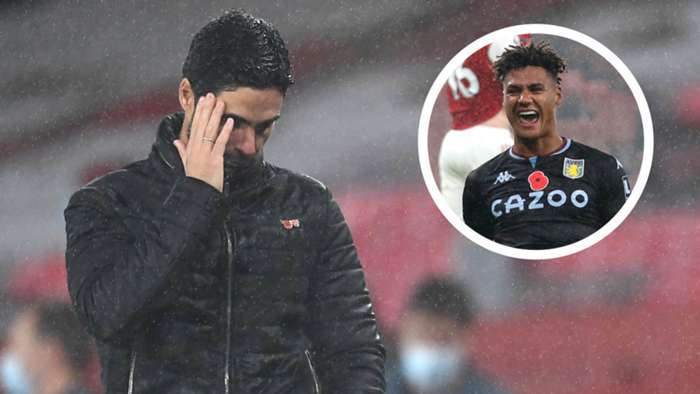 It was a moment that summed up Arsenal’s night.

He screamed for a corner, but he knew it was a goal kick. It was an appeal more out of embarrassment than anything else.

And embarrassmentwas the theme of Arsenal’s night, as they were beaten by a vibrant Villa side who gave them a lesson in attacking football.

Leading 1-0 at half-time through a Bukayo Saka own goal, the visitors ran riot after the interval and could easily have won by far more than just 3-0.

Arsenal had no answer to Jack Grealish, John McGinn, Ross Barkley and Ollie Watkins, with Villa’s attacking quartet pulling the Arsenal defence apart at will with their pace and movement.

Watkins scored two excellent goals and only some last ditch defending from Rob Holding and Dani Ceballos prevented Arteta’s side falling to an even more humbling defeat.

This was the Spaniard’s darkest night since he took over from Unai Emery almost a year ago.

Thework he has done since arriving in north London last December has been admirable, but Arteta must shoulder a lot of the blame for this defeat, Arsenal’s fourth in eight Premier League games this season.

Once again he started with Willian and Alexandre Lacazette in a front three alongsidePierre-Emerick Aubameyang, despite both players struggling for any sort of form.

Willian has nothad an assist since his debut at Fulham on the opening day of the season and is still searching for his first Arsenal goal, while Lacazette has notnetted since the defeat at Liverpool on September 28.

Both once again got the nod from Arteta against Villa, however, but neither could repay their manager’s faith.

Lacazette missed a golden opportunity to send Arsenal in level before the interval, when he headed over Kieran Tierney’s cross. That proved to behis only effort of the game.

He was eventually replaced by Eddie Nketiah on 65 minutes. In that time he touched the ball 15 times and managed just nine passes, two of which were in the Villa half.

It was an abject performance from Lacazette and one that was matched by Willian, whose error led to Villa’s opening goal and who continues to look lost amid his new surroundings in north London.

The performance and the manner of the defeat raises serious questions about where Arsenal are under Arteta, with Villa ruthlessly exposing the issues the Spaniard has been struggling to fix since his arrival.

Things are just not working in an attacking sense, with Aubameyang being left totally isolated out on the left wing.

With Lacazette continuously offering next to nothing in the final third, it isincredibly hard to justify playing the club’s best finisher and most prolific scorer out on the wing.

The Gabon international did nothave a single shot against Villa and has scored just once from open play all season, away at Fulham on the opening day of the campaign..

Arteta’s front three just is not working and needs shaking up. It hasbeen nearly five hours since Arsenal scored a goal in the Premier League fromopen play.

Creativity wise they are desperately lacking someone who can open up teams. How Arteta must wish he had someone of the quality of Grealish to call upon.

The Villa captain created six chances during the 90 minutes on Sunday night and was a constant thorn in the Gunners' defence, with his movement and eye for a pass.

Arsenal do nothave anyone like that in their ranks, aside from the now sidelined Mesut Ozil, of course.

The decision to move on from the German will always be judged depending on results. When they go like they did against Villa, then Arteta must accept the criticism that comes his way.

Arsenal have made progress under the Spaniard, with the FA Cup obviously already tucked away in the trophy cabinet. Defensively they are better and they now have a structure that usually makes them harder to beat.

But the Villa defeat brought back memories of the dark days towards the end of the Emery era,and Arteta must ensure that type of performance is a one-off and does not become the norm.

His seemingly unwavering faith inWillian and Lacazette is making him look like he has favourites, and that is never a good thing. Nicolas Pepe had two goals in his last two starts prior to the Villa game, yet once again was left on the bench in favour of the out of form Brazilian.

Pepe may have his own problems, but at least he provides a genuine goal threat and can make something happen out of nothing.