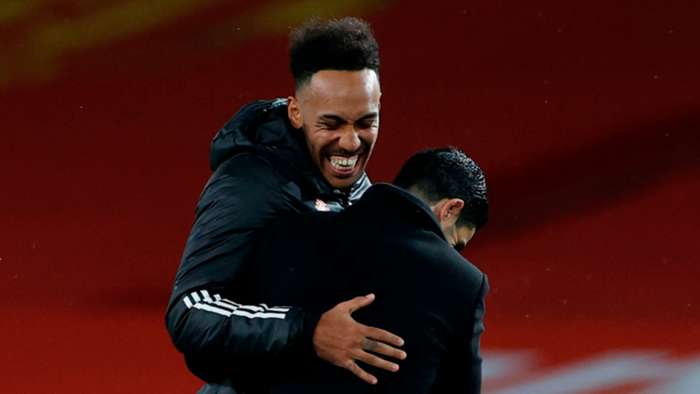 Arsenal manager Mikel Arteta admits he was glad to see Pierre-Emerick Aubameyang's goal drought come to an end on Sunday in his side's 1-0 win over Manchester United.

In striking from the spot, Aubameyang not only ended his goal drought but he also became the first Arsenal player to score a penalty at Old Trafford in Premier League history.

With Arsenal failing to score in their past two league outings in defeats to Manchester City and Leicester City, Arteta was clearly relieved to see Aubameyang get his name back on the scoresheet at a crucial moment.

"I’m glad it’s finished. Every striker needs goals and in these moments we have to create more for Auba. He has scored the crucial goal and it is going to lift his confidence," Arteta told BBC's Match of the Day.

"I wanted to keep it quiet from the players. I wanted to generate belief and I asked them to be who we are as a team right now. I’m delighted because we played with a lot of courage and big personality.

"They played a really tricky formation with four midfielders and two that constantly strain your back four. We could have scored twice in the first half and when we scored the goal we had to manage those moments. There was high stress, it is different to any other ground.

"Individually you have to win the fights and step up to the occasion and the performance of every player today was top drawer."

The Gunners' narrow victory was their first at Old Trafford in the Premier League since 2006 and also the first time they've beaten a 'big six' side away from home in the league since January 2015.