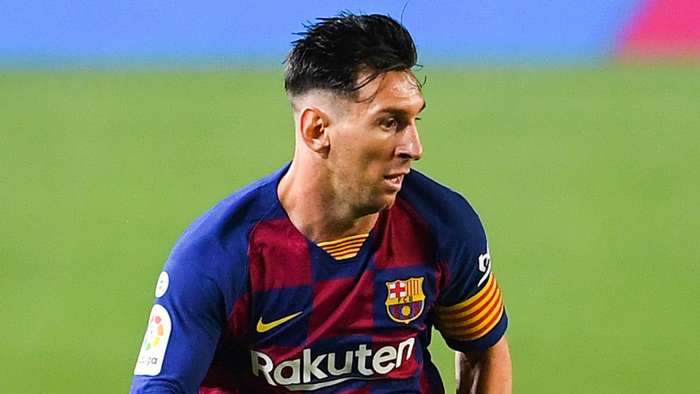 Luis Enrique has expressed his belief that "Barcelona will continue to win" without Lionel Messi, while predicting the and Six-time Ballon d'Or winner will leave "sooner or later".

Messi announced on Friday that he would stay at Camp Nou because the financial demands made by the Barca board for a transfer to happen rendered such a prospect "impossible".

The Argentina internationalaccused president Josep Maria Bartomeu of going back on his word that Messi would be free to leave if he desired at the end of the 2019-20 season – although a clause in his contractunderpinning this sentiment expired while a campaign extended by the coronavirus hiatus was still in progress.

Luis Enrique coached Messi for three seasons between 2014 and 2017, a period that saw Barca win the treble for the second time in their history

The 33-year-old made clear his frustration at the club's failure to reach those heights since, certainly asfar as the Champions League is concerned, but Luis Enrique would have liked a more cordial resolution.

"I don't know whether to pronounce on Messi... but I'm going to do it," he said at a news conference to preview Spain's UEFA Nations League contest with Ukraine.

"I think the clubs are above all people, players and presidents. Barcelona, ​​founded in 1899, is one of the best in the world. They have always won titles.

"It is evident that there has been a wonderful relationship. Leo has made Barca grow exponentially but I would have liked it if a much more friendly agreement had been reached.

Luis Enrique was widely reported to have clashed angrily with Messi midway through the 2014-15 season, before a sensational run of form inspired the MSN forward line – completed by Luis Suarez and Neymar – resulted in a stunning clean sweep of major trophies.

Despite working with such greats of the game and now taking charge of his national team, Luis Enrique insists it will not be in his nature to brag about the players he has coached when he retires from the game.

Indeed, it is not Messi or any of his current Spain squad who would top his list when it comes to the favourite players he has led from the dugout.

“I'm not a fetishist at all," Luis Enrique added. "I will say that I have trained a lot of players, better or worse, but that I have tried to make them better.