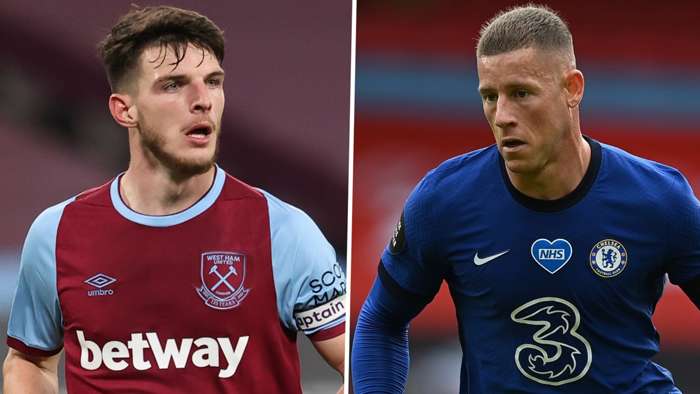 West Ham have been warned that Chelsea’s decision to let Ross Barkley join Aston Villa on a season-long loan means that an approach from the Blues for Declan Rice now “makes sense”.

The arrivals lounge has seen plenty of footfall, with the likes of Timo Werner, Kai Havertz and Ben Chilwell drafted in.

Frank Lampard is now looking to get bodies out of west London, allowing him to free up further space and funds in his squad.

Barkely has formed part of that process, with the England international playmaker heading to Villa Park.

Trevor Sinclair believes that agreement could pave the way for Chelsea to step up their interest in Rice.

The Blues know all about the 21-year-old having previously had him in their academy ranks and are said to be keen on adding his versatility to their centre-half and holding midfield options.

“One of the biggest problems for football clubs is week-to-week wages,” former Hammers starSinclair told talkSPORT on recruitment business among the Premier League elite.

“So getting Ross Barkley off the wages to bring in Declan Rice makes sense, unfortunately.”

Rice was released by Chelsea at the age of 14, allowing him to cross London and link up with West Ham.

He has enjoyed a meteoric rise to prominence in the East End, allowing him to switch international allegiance from the Republic of Ireland to England while becoming an established Premier League star.

The Hammers have no intention of allowing a prized asset to move on, especially this close to the October 5 deadline, but a big-money offer would test their resolve.

Various figures have been mentioned amid the Rice rumours and another former Hammers star, Joe Cole, hopes anything around the £40 million ($51m) mark can be fended off by David Sullivan and David Gold.

He has said: “It would be a big gamble to let him go because he is the most important player in that dressing room.

“We talk about what he is worth as an asset to the club financially but how much is it worth to stay in the Premier League?

“We have talked about the disconnect between the ownership group and the fans and I think it will be a step too far if they let him go.