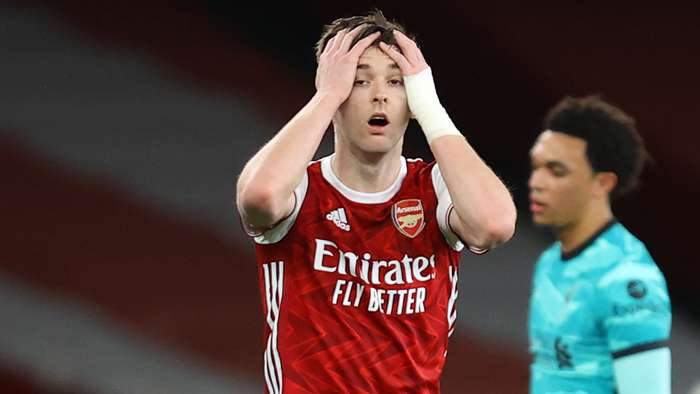 Arsenal are set to be without left-back Kieran Tierney for a period of between four to six weeks after the Gunners confirmed he hassuffered knee ligament damage.

The Scotland internationalsuffered the injury during the 3-0 defeat to Liverpool on Saturday, with Tierney replaced just before half-time at the Emirates Stadium.

And the north Londoners have now confirmed the severity of the issue, with Goal having reported on Tuesday that they were fearing a prolonged absence for the defender.

As part of a general team news update, the Gunners wrote on their official website regarding Tierney: "Kieran sustained ligament damage to his left knee during Saturday’s match against Liverpool.

"Surgery will not be required and it’s hoped that Kieran will be back in full training within four to six weeks."

With Arsenal having stated that their Scottish left-back could miss as many as six weeks of action, Tierney is likely to be absent for the majority of the remainder of the 2020-21 campaign.

Indeed, he will definitely miss both legs of the north Londoners Europa League quarter-final clash with SlaviaPrague, as well as Premier League meetings with Sheffield United, Fulham, Everton and Newcastle.

Mikel Artetas side then face West Brom on the weekend of May 8, before a trip to Stamford Bridge to face Chelsea follows a week later.

Should they reach the Europa League semi-final, the Gunners would face either Villarreal or Dinamo Zagreb, with the second leg of that potential tie due to be played on May 6, meaning Tierney is unlikely to be fit to play.

The former Celtic star will, however, hope to still be in a position to feature at Euro 2020 in the summer, with Scotlands first game of the tournament scheduled for June 14, against Czech Republic.

When asked whether he thought Tierney would play again this season, Arsenal boss Mikel Arteta said: "We are going to have to go day by day and see how Kieran is feeling. Then, when he gets close to playing time and how he is feeling, we will make that decision.

On David Luiz, the Gunners posted on their official website: "Luiz underwent a small procedure on his right knee at the weekend. The intervention went well and David is rehabilitating with the medical team.

"David is expected to be back to full fitness and available for selection in the upcoming weeks."

"Martin is being assessed ahead of Thursday’s match regarding his availability."

There was, however, more positive news relating to the fitness of Bukayo Saka, Emile Smith Rowe and Granit Xhaka, will all three having been passed fit to face Slavia Prague on Thursday night after returning to full training.