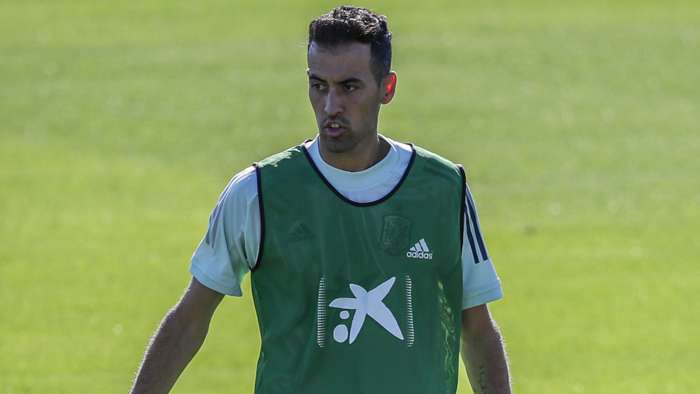 Sergio Busquets remains one of Spain's most important players, according to head coach Luis Enrique.

The Barcelona midfielder, who has made 116 international appearances, has had his worth called into question for club and country after a difficult season at Camp Nou.

But Busquets produced a performance close to his assured best as Spain snatched a 1-1 draw in their UEFA Nations League opener against Germany in Stuttgart.

Not that the 32-year-oldhad any need to prove himself to his former Blaugrana boss.

"Busi is a player who does not need to speak much because his presence imposes respect," Luis Enrique said ahead of Sunday's game against Ukraine.

"He makes better or worse games, but he is one of the most important footballers of the national team."

Bayern Munich star Thiago Alcantara shone alongside Busquets against Germany, completing 97 of 104 passes in the match, and joined Luis Enrique in giving a glowing assessment.

"It's a joy to see how he positions himself, how he manages the team," said Busquets' ex-Barca colleague.

"There is his presence, his game, his numbers for years ... to improve as a midfielder you must pay attention to him."

Ferran Torres, Oscar Rodriguez, Mikel Merino and Ansu Fati all made their debuts during the Germany clash, with Barca teenager Fati becoming the second youngest full international in his country's history.

"His performance does not surprise me, because I have seen all his matches at Barca," Luis Enrique said of Fati.

"His tranquillity his maturity and his naturalness have really surprised me.He is a different player, I don't need to explain it to you because you already see him.

"His involvement in training and his maturity make it very easy for me as a coach."

Adama Traore could be next onthe list of debutants from this international break after being cleared to join up with the Spain squad following his positive coronavirus test.

Nevertheless, Luis Enrique was keen not to be drawn on his plans for the Wolves winger.

"I would like all the players to be very happy, but I will decide the line-up with those who are more prepared," he added.