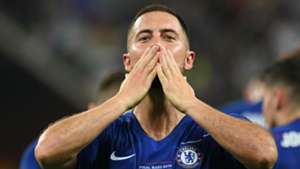 Frank Lampard admits he has had it tough on the transfer front at Chelsea, with his reign opened at Stamford Bridge having "lost the best player in the Premier League in Eden Hazard" and with a recruitment ban in place.

Sanctions against the Blues were eventually lifted, but they were unable to get any deals over the line in January.

That has left Lampard, in his first top-flight managerial post, having to work with those he inherited from Maurizio Sarri.

An agreement has been reached to take the exciting Hakim Ziyech from Ajax, but that move will not be pushed through until the summer.

As a result, Lampard has had to lean heavily on promising academy graduates and established senior stars, with the departure of Hazard for Real Madrid leaving him light on attacking inspiration.

"We couldn't control the ban," the Blues boss told reporters.

"We lost the best player in the Premier League in Hazard. We are trying to improve on the training pitch. We have shown we can get into fourth and now we have to kick on."

Securing a top-four finish would aid Chelsea's efforts to get further fresh faces on board, as they could offer Champions League football to any new recruits.

It may be that they are in the market for another goalkeeper, with questions being asked of Kepa Arrizabalaga's future in west London.

Lampard insists he has no issue with the Spaniard, who was snapped up for a record-breaking ?71 million ($91m) in 2018, but he has been favouring Willy Caballero between the sticks of late.

"My relationship is fine," Lampard said of the Kepa speculation.

"I can't keep every player happy. But the professionalism is there from him. Every player is in control of their own decision. Caballero is training well and performing well. I will decide as we go.

"I have read a lot of false articles of guessing players. All I am focusing on is game by game. Then there are decisions for the club."

Lampard is currently in the process of piecing together his plans for a trip to Bournemouth on Saturday, with Tammy Abraham, Christian Pulisic and N'Golo Kante definitely set to miss out while no decision has been taken as yet on Kepa's possible involvement.