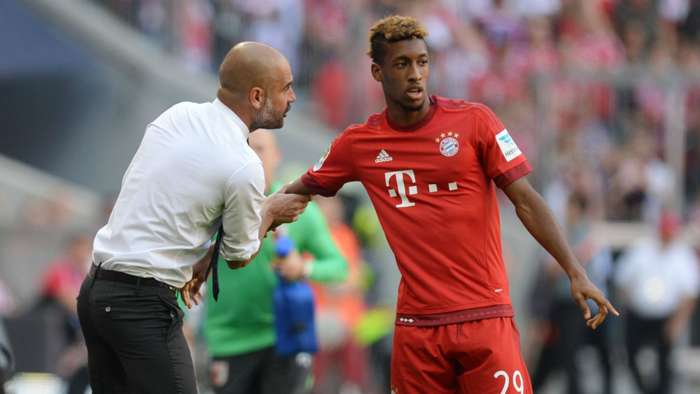 Kingsley Coman has highlighted Manchester City boss Pep Guardiola as the coach who has had the biggest influence on his career.

He has won league titles in three different countries, and last term he ascended to the top of the European tree by scoring the winning goal as Bayern beat PSG in the Champions League final.

Coman has his best years ahead of him, and he will go into those cherishing the time he worked under Guardiola at Bayern Munich from 2015-16.

“What he asked me to do was to see football differently from my position,” Coman told the Daily Mail. “He asked me to play wide, really go one against one, to make the difference like that.

“For me, the perfect game is to do a lot of skills, to help the team and to defend, and create a lot of opportunities.

“What I love is the way Guardiola played was to create space to be one against one. To have a coach when you are that young who has confidence in you and just wants you to go and play is amazing. When I play, I try to do beautiful stuff.”

Bayern won every game on their way to Champions League glory last season. Victory in the final in Portugal was the most celebrated, but arguably the one that will live longest in the memory is the 8-2 demolition of Barcelona in the quarter-finals.

Only time will tell if such a result will leave lasting scars on Barcelona’s players, but it is a game Coman will never forget and his France team-mates who represent the Catalan side felt it was “perfect football.”

“I spoke to Ousmane Dembele, Antoine Griezmann and Clement Lenglet, the French guys in Barcelona's team,” Coman said. “They told us we had played perfect football. We were so motivated, really confident. What we did, nobody can ever take away from us.”