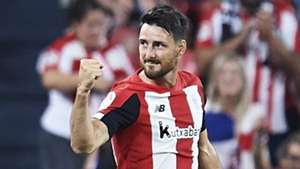 Aritz Aduriz does not see his retirement nor Athletic Bilbao's Copa del Rey final with Real Sociedad as important amid the coronavirus pandemic.

The veteran striker, who has scored 172 goals in over 400 appearances for Athletic, announced his intention to retire at the end of this season back in August.

His final season as a player is set to be marked by an all-Basque Copa del Rey final between Athletic and La Real.

Originally scheduled to take place on April 18 in Seville, the Copa showpiece - along with the vast majority of sport around the world - has been put on hold.

It is not clear when the final will be played. However, Aduriz accepts even an occasion as momentous as the clash with Sociedad has little significance amid a crisis that has killed over 12,000 people in Spain.

"This coronavirus crisis is forcing us to think twice and consider what matters," Aduriz told Athletic's official website. "And now my retirement, or football in general, or if we will play [the Copa del Rey final] or not doesn't matter.

"I think there are many other more important things to stop and solve. I'm sure with everyone's help together, with each of us playing our role, we will get ahead of it. That's what I'm focused on at this moment and that's the most important thing."

Aduriz was born in San Sebastian, where Real Sociedad hail from, but he expects a respectful reception from their fans if and when the final goes ahead.

He added: "Maybe all of us are keeping in mind the Copa del Rey final, but we're prioritising other things now.

"We're all going through a tough time where many people are struggling a lot and even passing away...so, the final of the Copa has its importance, but maybe not that much now.

"There are other things we need to solve together, and if the day [of the final] finally comes, I'm Donostiarra [people originally from San Sebastian]. I've always felt very comfortable in Donostia [the city's Basque name] and that won't change whatever happens in any football game. I'm sure they will treat me in the same way, no doubt."

Asked about recognition for his achievements from Athletic fans, Aduriz replied: "If we've learned something from this pandemic or virus that we're struggling with, it's that we should think twice about what is important.

"I sincerely believe the people who really deserve a statue and recognition are clear nowadays, and it's not me or any football player.

"I would build a statue to those who are battling every day at the very front line against the virus in all the hospitals. They're showing us what really matters.

"We have to realise what's important and what isn't. And this is probably showing us that football isn't important enough for this kind of recognition."