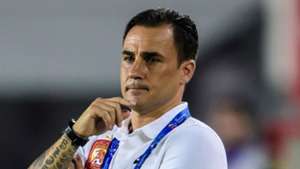 Fabio Cannavaro has delivered an emotional message to the Italian public, urging them to stay at home amid the coronavirus outbreak and embody the spirit of the 2006 World Cup-winning Italy squad.

The former Juventus, Real Madrid and Inter centre-back is currently head coach at Chinese Super League side Guangzhou Evergrande, where he has witnessed the devastation being caused by the coronavirus pandemic.

Italy, meanwhile, has been the worst affected country, with the official death toll recorded at 12,428, as of April 1, and Cannavaro has expressed his sadness at the situation in his homeland, urging the Italian people to keep looking out for each other.

His message, via The Players' Tribune, began: "To Everyone Back Home,

"What is happening to our country right now is filling me with anxiety and pain. I cannot describe how horrible it feels to see Italy suffer like this, to see so many lives lost each day. My heart goes out to all the people who have been affected, and especially to those who have lost someone they are close to.

"I also want to salute the medical workers who are working hard to save as many lives as possible. You are the true heroes that our country needs right now.

"Sadly, though, the reality is that none of us is Superman. None of us is immune to this virus. And yet when this epidemic broke out in China, I felt as if we Italians thought we were going to be O.K. As if we were all thinking, Well, at least it won't affect me.

"I certainly underestimated it. At first, I thought it was just a flu. How wrong we were.

"At least we have shut the country down and ordered people to stay at home. Here in China, where I have been coaching Guangzhou Evergrande, I went into quarantine a few weeks ago. People here had already dealt with SARS, so they knew what to do. In Italy we have never had an emergency like this.

"But now that we are in the middle of this battle, we must fight it together. And that means bringing out the best versions of ourselves.

"Of course, we all know Italy is an amazing country. We have stunning coastlines and a scenic countryside. We have a climate that allows us to spend a lot of time outdoors. We have fashion, we have food. But life in Italy is so good that sometimes we tend to rest on our laurels. Sometimes we look after our own things instead of thinking about the common good. And when we do that, we are wasting our potential.

"Fortunately, however, there are also moments when we really decide to show our pride -- and those moments tend to be when the going gets tough. When there is something important at stake.

"I have experienced this many times, and the best examples that come to my mind are when Italy have played in World Cups. Perhaps that seems a weird thing to bring up at a time when sports seem more trivial than ever. But as we all know, football is more than just a sport in Italy. When the national team plays, everyone feels a part of it. Everyone comes together. And when Italians come together, we tend to do well.

"I can still remember watching Italy win the 1982 World Cup. I was just an eight-year-old kid in Naples, my hometown, watching the games with a bunch of people in the houses of relatives and friends. I can recall that when Italy scored, we would shout and hug, even though we did not all know each other.

"When I was captain of the national team at the 2006 World Cup, I saw something similar happen with the players. The Calciopoli scandal broke out just before the tournament began, so when we met up to prepare, we were all on edge. A lot of people thought that the scandal was going to distract us.

"But the mood in the camp was always good, and that was the key. In such a critical moment, we did not just look after ourselves. We cared about everyone. We also had a great leader in Marcello Lippi, who kept up the harmony and motivation in the group. As soon as we landed in Germany, we had practically forgotten about the scandal, and we couldn't wait to play.

"Right now we need that same spirit of unbreakable unity as a country. Already we have seen some great examples of solidarity. The phrase andra tutto bene -- everything will be all right -- is a message of support to those who are trapped at home, to those who are scared, lonely or depressed. People have stepped out onto their balconies to applaud our medical workers. Neighbours have sung songs together. This is the kind of unity we need.

"When this crisis is over, Italy will be different. Many will have lost jobs. Some will have lost businesses. There will be an awful lot of hard work to do. We can only hope that a vaccine will become available as soon as possible, so that we can put an end to this nightmare once and for all.

"Until then, we just have to dig in. So let's stay at home and spend time with our families, and let's try to have direct contact with as few people as possible.

"And let's also try to do what we can for the common good. For my part I have started a fundraiser along with my 2006 World Cup team-mates. The proceeds will go to the Italian Red Cross and will be used to supply hospitals in Italy with whatever they need to beat the virus. I hope you will join me in making a donation.

"And if you can't, a simple act for your neighbour can go a long way, too. We must all remember that this battle is a team effort, and that we need everyone to join in. Sure, it is true that none of us is Superman. But when we stand together, we can achieve anything. Stay strong, my brothers and sisters."