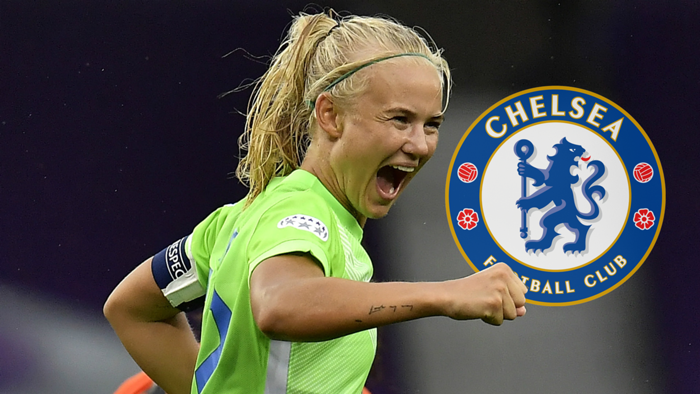 She played her final game for the club on Sunday in the Women's Champions League final, but was unable to secure a dream goodbye in the form of a European treble, with Lyon winning their fifth successive title in the competition.

After being one of the hottest properties in Europe when she signed from Swedish club Linkopings in 2017, Harder has taken her game to another level with Wolfsburg. She ranked at No.5 in last year's Goal 50 andarrives at Chelsea as one of, if not the best player in the world right now.

‘I’m extremely happy and extremely excited to get started, to finally be here and be a Chelsea player. I couldn’t be more happy," she said.

"I’m excited to just play for such a big club, to play with so many amazing players and to also be playing in the league. The English league, it’s so exciting at the moment and I’m really looking forward to it."

It is a deal that further underlines the club's desireto secure a European title that has not only eluded the Blues over the years, but Harder herself too, with Sunday's defeat in the final her second in three years.

"Pernille is one of the best players in the world," Emma Hayes, head coach at Chelsea, added.

"Her record at Wolfsburg and Linkopings, as well as internationally with Denmark, shows how valuable she has been to her teams.

"She is a fantastic team player who wants to take her game to the next level. She chose Chelsea as the club that can push her to that level. She can play for any team in the world, but she chose us.

"She chose the players, the staff, the environment, the playing style. You can’t get a bigger compliment than that from one of the best players in the world."

Rumours of this deal have been around for some time, with Harder's partner, Magdalena Eriksson, currently the captain of Chelsea.

The pair played together at Linkopings and when asked about her future earlier this year, Harder admitted that the plan was for them to play together again, albeit when her contract expired in 2021.

"It is clear that we miss each other in everyday life, so the plan is that we, at least when my contract expires, will play together again," the Denmark captain told Fotbollskanalenin March.

"We talk a lot about this, about our future, and we think the same," Eriksson added."We feel dangerous that our contracts expire at the same time and we want to try to find a solution that is good for both of us, which above all means that we get closer to each other.

"It will have more priority than it has had in our other decisions that we have made before."

Because Chelsea have chosen to secure Harder's signature this summer instead,Sportsbuzzerreported last week that the Blues would have to pay€350,000 for the forward- a record fee for a Bundesliga player.