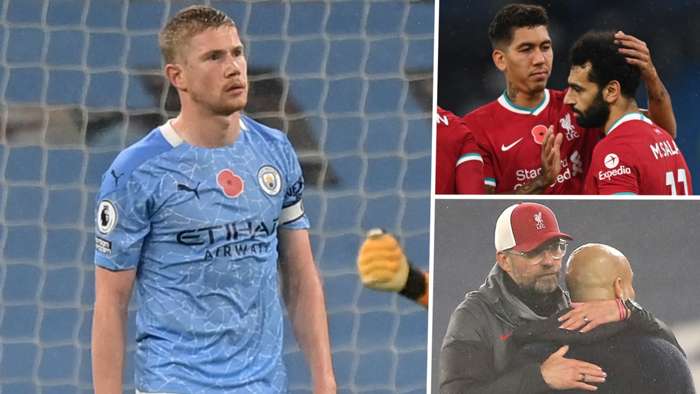 Kevin De Bruyne is so often the man that makes the difference for Manchester City.

But for once, against Liverpool on Sunday, De Bruyne got it wrong.

The midfielder’s miss from the penalty spot at the Etihad Stadium proved crucial as City missed out on what could have been a significant victory in the early weeks of the title race over Jurgen Klopp's defending champions.

The winners of this season's Premier League would still seem most likely to come from the two sides that played out a brilliant, non-stop clash here, and as such a draw away from home suits Liverpool far more, particularly given De Bruyne's mishap.

Title races can be decided by small margins, though City, in 2018, and Liverpool last season both romped their way to the silverware in recent times.

But in the 2018-19 campaign, the two best teams in England went toe-to-toe until the very final match of the season, whenCity emerged as champions by just a single point.

Things may have been a lot different, though, had City winger Riyad Mahrez not blasted a late penalty over the bar in a goalless draw at Anfield early in that season.

Ironically, thatwas the last time a Premier League player failed to hit the target from the spot before De Bruyne’s miss in the 1-1 draw at the Etihad.

And while City ultimately got away with that wasted opportunity come the end of the campaign,they might not be so lucky a second time.

De Bruyne, probably the most gifted passer in the world, dragged his 42nd-minute effort from 12 yards the wrong side of the post despite having sent Alisson Becker the wrong way following Joe Gomez' handball.

It was the first time the ex-Chelsea manhad missed in six attempts since taking over penalty duty in February after Sergio Aguero, Ikay Gundogan, Raheem Sterling and Gabriel Jesus had missed five in seven attempts between them.

The look of horror on the playmaker's face as his effort drifted wide will have been matched around the world by City fans watching on.

The result leaves City still marooned in the bottom half of the table heading into the international break, with Liverpool five points ahead of their rivals and leaders Leicester City a further point clear.

Pep Guardiola's sidemay have a game in hand on all-bar-one of the teams in front of them, but this was an opportunity to close the gap and get amongst the clutch of the teams fighting it out at the summit.

As it is they will reflect on a game that, despite falling behind to a Mohamed Salah penalty and Liverpool's vibrant attackers causing them problems, they realistically could have won.

Not only did De Bruyne err from the spot but after the break Jesus, who had scored a superb goal to equalise in the first half, powered a header wide when left free in the area.

De Bruyne had set up that goal for Jesus with his sixth assist in his last four matches, but it will be his inability to convert just over 10 minutes later that this game will be remebered for.