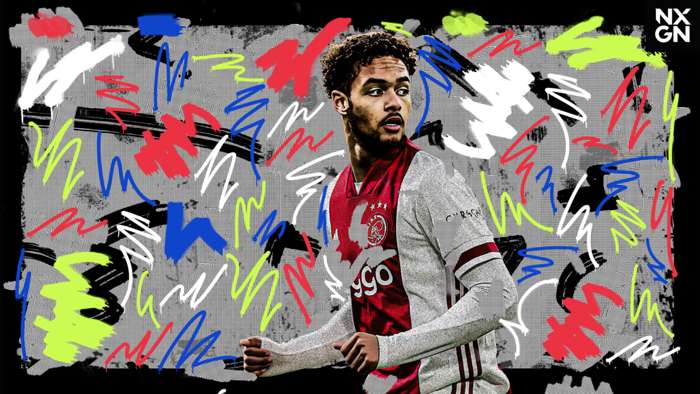 It is no longer a shock, but Ajaxs ability to sell a key player for big money, before replacing them with an outstanding academy prospect remains one of the more eye-catching feats in European football.

The Eredivisie giants, who had the most players of any club in the 2021 NXGN list of the worlds top teenage footballerswith five, continue to churn out supremely talented youngsters, with Ryan Gravenberch and Brian Brobbey the current cream of the crop.

They are not, however, the only youth productsmaking an impact on the first team this season, with 18-year-old Devyne Rensch having emerged to become a staple of Erik ten Hags defence.

Ten Hag may wondered how he would go about replacing Sergino Dest following the United States internationals summer move to Barcelona, and though he still hasNoussairMazraoui to call upon, it is Rensch who has stepped up.

Despite only having made his first-team debut in November, the Netherlands youth international is already a regular at the Johan Cruyff ArenA, with Mazraoui now facing up to being forced into a substitutes role when he recovers from his current eye injury.

Renschs ascension is even more surprising given that he was not even scoutedby a professional club until the age of 13, whereas a number of Ajaxs current young gems have been with the club since they were eight or nine.

Having played predominantly as a winger for his childhood team VV Unicum, Rensch struggled with growing pains as he entered his teenage years, hence his relatively late emergence as a talent worth signing.

His first trial came at Ajaxs great rivals PSV, but the Eindhoven outfit decided against keeping himin a decision they surely regret now.

"I did an internship with PSV first, but I was dropped out of that," he toldAjax TV."Then I was allowed to do five training sessions with Ajax, and it took only two sessions before they said they wanted me, so maybePSV werewrong!"

That was in 2016, and only four years later Rensch was being named the winner of the Abdelhak Nouri Trophy, an awardgiven to Ajaxs best academy player of the previous 12 months which counts Christian Eriksen, Donny van de Beek, Matthijs de Ligt and Gravenberch among its previous winners.

That only serves to illustrate the level of talent that Ajax is renowned for producing, and, in Rensch, they have a player who is showing enough to suggest that he will be able to thrive in a number of roles as his career develops.

Described by Ajaxs head of youth development,Said Ouaali, as a "true Ajax defender" due to the comfort he is able to show in possession, Rensch has played as a centre-back, full-back and defensive midfielder during his time in the clubsacademy, and excelled in each position.

Two-footed, he made his competitive first-team debut against FC Emmen as a left-back, having scored a superb goal against Red Bull Salzburg while playing in the same position during pre-season.

He has since grown into his role as Ten Hags go-to right-back, though it is thought that he will eventually transition into playing at centre-back over next 18-24 months.

“I’m enjoying the giant steps he’s taking," Ten Hag toldAlgemeen Dagbladafter Rensch scored his first senior goal and provided two assists in Februarys win over ADO Den Haag."He has great vision, athleticism and technique, so he has a number of attributesto have an amazing career.

“I’m very curious where he will standin one-and-a-half years. Talent-wise, he’s maybe even better as a central defender.

"I’m proud that he is making these steps at such a young age, although he has to stay humble and has to keep pushing. If he does that, he can go much further, even in a short amount of time."

Though that performance against Den Haag remains the only time Rensch has been directly involved in goals since his first-team bow, the attacking instincts from his youth mean he is as much a potent weapon in the final third as he is a strong presence in his own penalty area.

His blistering pace has allowed him to regularly arrive late into the opposition box when Ajax attack, while his three goals and two assists for Jong Ajax in the Dutch second tier this season suggest there is more to come from him from an offensive point of view.

For now, though, Rensch is just enjoying being part of the senior squad, even if he does have to deal with the responsibilities that come with being the youngest player on the roster.

"Its easy tonotice during training that I am the youngest," Rensch said."For the rondo, the youngest always starts in the middle. Also after training, it’s up to me to clean up. They don’t even have to ask me anymore!

"I’m not mad about it, just happy to be in the team and playing my matches."

On his own playing style, he added:“I’m a brave player. I dribble a lot and go past my opponent. Defensively,I have good positional awareness.

"I try to learn from Daley Blind. He is on another level with his thoughts. He’s so bright. I can learn from that. He’s so calm andgreat whenpassing. I admire that and try to reach that level too.”

For now, Rensch is focusing on seeing out the season with Ajax, and a strong culmination to the campaign could see him called up to the Netherlands Under-21 squad for the knockout stages of the European Champions after he narrowly missed out on playing in the group stages.

From a club perspective, Renschsigned a contract extension in the summer of 2020, he is tied to Ajax until 2023, though Juventus have reportedly shown an interest in signing both him and Gravenberch as the Bianconeri plan a major rebuild.

If Rensch does carry on his current trajectory, it is likely only a matter of time before he does flythe nest.