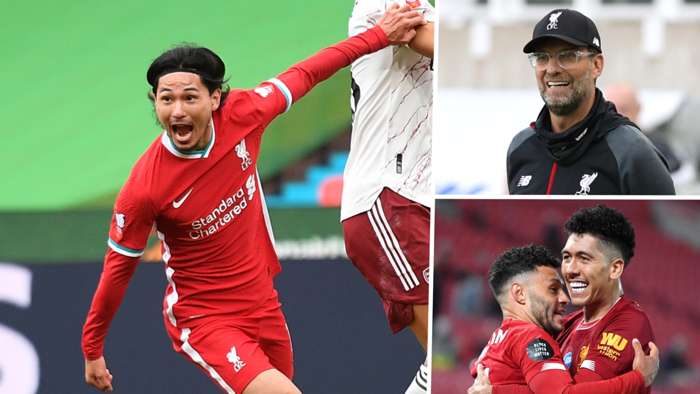 It was only the Community Shield, it was only one goal, and in the end it didn’t even matter.

For Takumi Minamino, though, it may well have been the start of something.

Liverpool will certainly hope so.

It hasn’t been an easy beginning for the Japan international at Anfield. Joining a new club mid-season is difficult enough; doing so a few weeks before a pandemic which forces the world into lockdown is something else entirely.

It would test even the strongest of characters, but with the new Premier League season looming large, the signs are that Minamino, belatedly, is ready to get stuck right into his Reds career.

The reaction to Liverpool’s defeat at Wembley on Saturday has largely been one of negativity, of questions about the reigning champions’ squad.

A penalty shootout loss in a ceremonial fixture, two weeks before the campaign starts for real, has been enough to spark panic in some quarters. In fairness, some of the concerns – such as a lack of depth of centre-back – are entirely logical.

There were positives too, though, with Minamino chief among them.

Introduced as a second-half substitute, the 25-year-old was, along with Andy Robertson, the Reds’ standout player against Arsenal. He took the ball, he kept it, he worked and he threatened. He scoredwithin 14 minutes of his arrival and, later, converted his spot-kick with aplomb.

Virgil van Dijk was certainly impressed. The Dutchman was one of the players – captain Jordan Henderson was another – who had spoken to Jurgen Klopp after Salzburg came to Anfield for a Champions League group match last September.

Liverpool won 4-3 that night, but Minamino had given them all sorts of problems with his touch, movement and non-stop work-rate. “Sign him if you can!” was the message from Van Dijk & Co.

“I think Taki has been very good,” said Van Dijk on Saturday. "After lockdown, he has been the Taki that we all saw when we played against him at Salzburg.

“He is very, very energetic and he is a fantastic player. It’s good for him that he’s coming out of his shell and for us as well.”

Klopp and his staff have been similarly encouraged.

Minamino looked bright during Liverpool’s pre-season friendlies in Austria and has been noticeably sharper, stronger and more vocal during training sessions. Lockdown allowed him to improve his English and, through regular Zoom, Skype and WhatsApp sessions, to integrate with his team-mates more as well.

“Yes, he can be a real player for us,” Klopp said after the Community Shield. The manager is well aware that questions about whether Liverpool have adequate cover for their first-choice front three are getting louder – and with doubts over the futures of Divock Origi, Rhian Brewster, Xherdan Shaqiri and Harry Wilson, we can expect that to continue.

But he believes in Minamino’s ability to cover, both as a wide player drifting infield and, perhaps more so, as an understudy to Roberto Firmino in the No.9 role. He may only have started five games since arriving, but there will, according to Klopp, be a lot more to come.

“He is a player who is really useful for us,” he enthused. “He is really good in small spaces, his first touch is exceptional and then his decision-making between the lines is really quick. That helps!”

Those attributes, and that versatility, explain why Liverpool were so keen to bring him to Merseyside.

They had been aware of him even before he shone in that Champions League tie – one source has told Goal that a deal was already in the pipeline at that point – but accelerated their interest as autumn turned to winter, as the likes of Manchester United and Borussia Dortmund began to circle.

The cost of the deal helped, of course. The Reds’ recruitment team had been delighted to discover that a clause in Minamino’s Salzburg contract allowed him to move for just £7.25million ($9.75m), a fact his fellow suitors were seemingly unaware of.

Liverpool believed the player was, and indeed is, worth more than double that fee – he’s an established international, with Champions League experience, who has now picked up a league winners’ medal in each of the last six seasons.

Jesse Marsch, the Salzburg manager, agrees. “Liverpool got him way, way, way too cheap,” he told the Liverpool ECHO’s Blood Red podcast back in May.

Marsch, like Klopp, believes Minamino can be most useful deputising, or competing, with Firmino as a roaming centre-forward.

“He won’t be the best at playing the position that Salah and Sadio play, because they are used in very explosive transition movements,” the American says.

"I think he could be good inFirmino’sposition where against the ball, he is ready to do some pressing, but then with the ball, he comes into almost a 10 position for build-up and gets in the box to score goals.

"Firmino is so good at it but I think that’s something Taki can do as well.”

Minamino showed at Salzburg that he can both create and score – indeed, his record of 64 goals in 189 appearances is very similar to Firmino’s before he left Hoffenheim for Liverpool (49 in 153).

In both cases, it was their versatility, work-rate and attitude, in addition to their natural talent, which set them apart.

It would require plenty of improvement, a fair bit of luck and a truckload of hard work for Minamino to become as important to Liverpool as Firmino is, of course, but if he wants to kick on then he is at the right club, and has the right manager behind him.

And, at 25, he certainly has time on his side too.

“He is equipped with all the tools to play in that team,” Marsch told Goal recently. “It is just about adapting to the level which things are done.

“It may take time for everyone to fully appreciate his qualities, but it will come.”

Sooner rather than later, Liverpool fans will hope.

The desire for signings will remain and understandably so, but it is easy to forget that the club made one in January which is yet to reap its rewards.