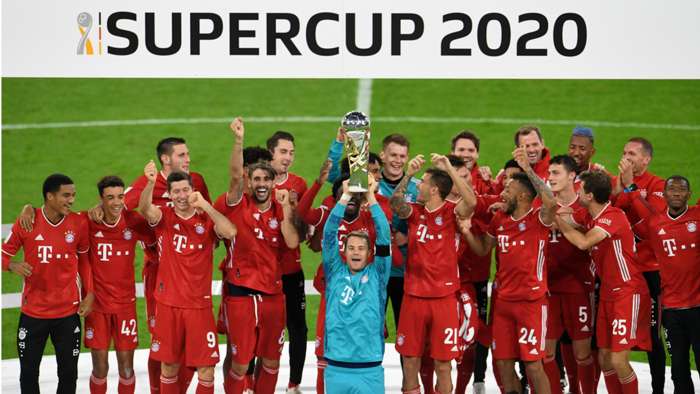 Hansi Flick admitted Bayern Munich made life difficult for themselves in theDFL Super Cup win over Borussia Dortmund that completed a quintuple of trophy triumphs.

Bayern had already won a trophy this term after clinching the UEFA Super Cup, so Bayern now can point to owning five current titles.

But what at one stage looked like being a routine win turned into a testing contest for Germany's all-conquering side on Wednesday.

Dortmund were in trouble when Bayern surged 2-0 up in 32 minutes through goals from Corentin Tolisso and Thomas Muller, but Julian Brandt and Erling Haaland struck to bring the teams level heading into the final half-hour.

Kimmich pinched an 82nd-minute winner after robbing Thomas Delaney of possession and exchanging passes with Robert Lewandowski,finding the net at the second attemptwith a desperate flick at the ball after his initial shot was blocked.

"We wanted to win the game, but it was really not soeasy.We deserved to lead2-0 and then made life difficult for ourselves," head coach Flick said.

"However, what counts for me is that we won the game and everything else is something thatwe'll want to do better on Sunday."

Bayern's Sunday assignment in the Bundesliga is a home game against Hertha Berlin.

Kimmich was relieved to get his hands on another trophy, after Dortmund threatened to take the win.

It took a fine save from Bayern goalkeeper Manuel Neuer to deny Haaland a goal that would have put Lucien Favre's Dortmund side 3-2 ahead.

"In the end we have the trophy. That feels good," Kimmich said, quoted on Bayern's website. "We fought for the cup, even if it wasn't our best game."

Like his boss and the match-winner, Neuer recognised Bayern were not at their most impressive level.

Neuer said:"You know that you're playing against a strong team, so something can always happen andwe saw that today.It was our fault that we letDortmund back into the game."

"You can't always assume you're going toscore three goals, but at the end Joshua Kimmich did well," captain Neuer added.

There was regret in the Dortmund camp overthe chance of a trophy gone begging.