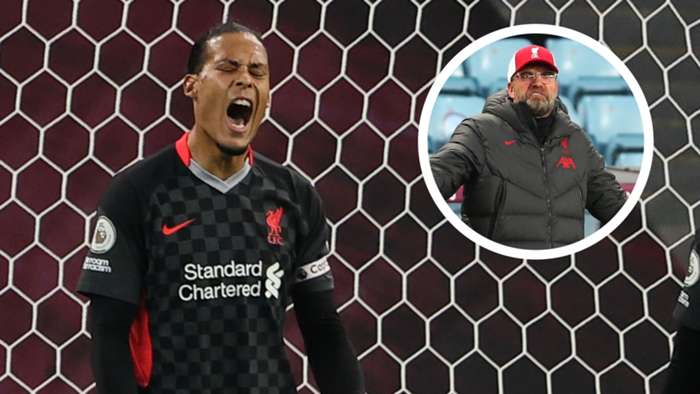 Sometimes it needs the words of Sir Alex Ferguson to truly sum up what the world has just witnessed.

On a day when Manchester United, Ferguson’s old club, plumbed new depths with their undressing at the hands of Tottenham, Liverpool decided to take the heat off their old rivals with a performance that was both even more stunning andeven more shambolic.

Where do you even start with this one?

Jurgen Klopp’s side were ripped apart, destroyed by an Aston Villa team which exposed the reigning champions’ chin in quite brutal fashion.

It finished 7-2, but it genuinely could have been anything. Liverpool, a side that prides itself on its heart and its cohesion, its solidity and structure, were unrecognisable, bewildered strangers with Liver Birds on their chest but shoelaces tied together.

Their first-half display, in particular, was about as bad as it gets. Never under Klopp have they looked so weak, so vulnerable, so utterly ill-at-ease.

You would have seen better, more convincing defending in the Liverpool Sunday League.

Liverpool had more shots and three-quarters of the ball, but conceded four times in the opening 45 minutes – and it could have been more.

It did notget much better after the break, either. More than five years after the horrors of ‘Stoke away’, and that dim, disgusting 6-1 loss, this was every bit as bad.

Worse, in fact. Brendan Rodgers’ side was broken, its race run. They were imbalanced and bereft of confidence. This was the Premier League champions, taken to the cleaners by Ollie Watkins, standing and admiring Jack Grealish, smashed for sevenby a team which only managed to avoid relegation on the final day of last season.

Who, truly, saw this coming? Sure, Liverpool have notbeen as solid as we expect - they conceded three against Leeds on the opening weekend - but seven goals? Against Villa? Unheard of.

Klopp bristled when Roy Keane, on Sky Sports, suggested his side had been “sloppy” in beating Arsenal on Monday night. How dare he, after a 3-1 win?

Keane was notin the studio for this one, and that was probably for the best. Lord knows what he would have had to say if he was.

The errors were constant, individual and collective.

Adrian, standing in for the injured Alisson Becker in goal, gifted Villa their opener inside four minutes. The Spaniard’s lack of conviction with the ball at his feet is a real issue in a side such as this, and the fear is that Alisson’s shoulder problem is not a minor one.

Everton, top of the league and Liverpool’s next opponents, will be licking their lips for sure.

Watkins, Villa’s summer signing from Brentford, had never previously scored a Premier League goal, but he had three by half-time here, with Liverpool’s defence claiming the assists.

Joe Gomez, Trent Alexander-Arnold and even the totemic Virgil van Dijk all had nightmares. In front of them Fabinho and Gini Wijnaldum were mirages, offering neither protection nor penetration. Naby Keita, the third midfielder, was hooked at half-time, though he was far from Liverpool’s worst performer. Klopp, genuinely, could have substituted any of them.

Villa, gleefully, accepted their gifts. They had some luck with deflections, but they also missed a boatload of chances themselves. Every time the home side attacked, Klopp’s side looked vulnerable. Dean Smith should be proud of his team's showing.

Grealish, unplayable at times, scored twice, and Ross Barkley, the former Everton midfielder, added insult to injury with a goal on his debut following his loan move from Chelsea. He should, in truth, have had a hat-trick of his own.

Villa, then, join Everton as the only teams with their 100 per cent record still intact in the Premier League.

Liverpool, meanwhile, are the first reigning champions in England to concede seven goals in a top-flight match since Arsenal in September 1953. They could, perhaps should, have been the first side to concede 10 in a Premier League game.