From England & Man City No.1 to 15 months out: How Bardsley conquered 'dark' injury demons

From England & Man City No.1 to 15 months out: How Bardsley conquered 'dark' injury demons 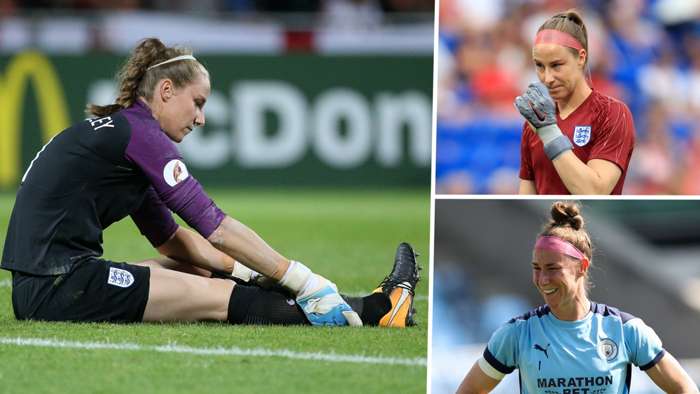 It’s 15 months since Karen Bardsley last played a competitive game of football. For someone who has played almost every game for club and country over the last 10 years, that’s a verylong time.

“I knew it was bad because things don't pop if they're not bad,” Bardsley tells Goal .

Adrenaline would carry the 35-year-old through the game, but there was no chance she would play against the United States a few days later.

“I probably got about five or 10 minutes into our warm-up in training the day before the semi-final and I went to just make a pass with my left foot and I just face planted and I was like, 'Uh oh! 'This is me done',” she says, now in her typically high spirits, laughing looking back.

Surgery was required after the World Cup, meaning a substantial spell on the sidelines. Bardsley is no stranger to injuries, even breaking her leg at Euro 2017, but this one proved to be the toughest yet.

“Not being involved was something really, really difficult because it was something I'm really proud of. I probably went to some dark corners of my mind in the very beginning.

“I found it difficult to watch football and be around the team because it hurt so much.

“I think there were a few moments when I thought, I literally don't know if I'm ever going to be able to play football again.

“It really made me dig deep, probably deeper than I ever have before, but I'm a believer in, if you work hard enough, and long enough, and you're persistent, you will get to where you want to go eventually.

“It was important for me to have a look back as well at what I've done and kind of remind myself, I'm still that person.

“I could still achieve A, B, and C. I’ve still won six trophies for the club. I've still played in seven major tournaments. No one's going to take that for me.

“In those moments, you kind of have to think about those things.”

Bardsley started to step up her return after Christmas 2019 and in early March was cleared to return to training, with her sights set on pushing for a return to the Man City team and staking a claim to be in Phil Neville’s Team GB squad for the Summer Olympics.

However, at the same time, the Covid-19 pandemic would cause all football in England to be postponed indefinitely.

“I don't even know what to say about that. I went through so many emotions,” she says.

“I think there was one point I went out to do a session at home, I came back through the door and I just like burst into tears.

“But I think everything happens for a reason and I think I probably would have pushed myself and maybe I wouldn't have been ready.

“With this particular injury, it was just really, really difficult. Some of the training I wasn't capable of doing at that time, so if I would have been trying to do that while trying to make an Olympic squad and things like that, I probably would have ended up hurting myself even more.

“I just think everything's a blessing in disguise and there's always an opportunity to find a positive.

“You just need to keep going and just be resilient and that was my opportunity to do that, and really reflect and dig deep and understand how much I really want this.”

Now, football is back and Bardsley is back, describing herself as like a kid on the first day of school, or an excitable puppy, throughout pre-season.

She has her work cut out for her when it comes to getting that No.1 shirt back for Man City and for England. Ellie Roebuck, her 21-year-old team-mate, has shone in her absence for club and country.

However, having overcome incredible obstacles in the last 15 months, Bardsley is ready for the challenge that has been set.

“I feel like she's my little sister, so I'm just like any other goalkeeper, I'm really proud that she stepped up and done really well,” she says.

“But at the same time, now my biggest motivation is to get my shirt back.”

This weekend’s FA Cup quarter-final against Championship side Leicester City may be the opportunity Bardsley gets to make her competitive comeback.

But whether it’s this Sunday or some point further down the line, she will be ready to grab the chance with both hands.

“I appreciate the fact that people understand it's not been the easiest time for me, but I feel really good right now,” she says.

“I think it's taken me a little bit longer than I expected, but I'm starting to feel like my old self.