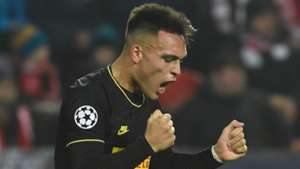 As reported by Goal back in November 2019, Lautaro is at the top of the Catalan club's wish list as they search for a long-term replacement for Suarez, who is now 33 and has a contract until 2021.

Inter defender Godin heaped praise on 22-year-old Argentina international Lautaro, who had scored 16 goals across all competitions before Serie A was postponed due to the coronavirus pandemic.

"Lautaro is similar to Luis and Sergio Aguero," the Uruguayan centre-back told ESPN .

"He's learning to play using his whole body, with his back to the ball. He's a football player.

"His confidence has a high ceiling and he's maturing with every match. You can spot things in him that tell you he'll be around for 10 or 15 years."

Despite the frequent speculation over this future, Lautaro's agent has insisted the Argentine remains grounded although that he does aspire to be of the most sought-after players in forthcoming transfer windows.

"It is said that Barcelona and Real Madrid want him, but it has no effect on him," Beto Yaque told Radio La Plata . "Other players would not sleep at night.

"He never calls me to ask if the rumours are true or false, he is focused on the present and his work.

"We talked to many people, however, nothing more happened. For now, those who call me are not club leaders. There is nothing formal or serious.

"It is a dream [for Lautaro] to be one of the most coveted players on the market. But nothing special is happening to him. The only thing he wants is to play and score.

"His constant growth has meant that the best teams in the world watch him carefully. We hope that his work will be rewarded as it deserves to be."

Lautaro swapped Racing Club for Inter in 2018 and he has quickly established himself as one of the most impressive forwards in European football, scoring 25 goals in total since joining the Serie A title hopefuls.