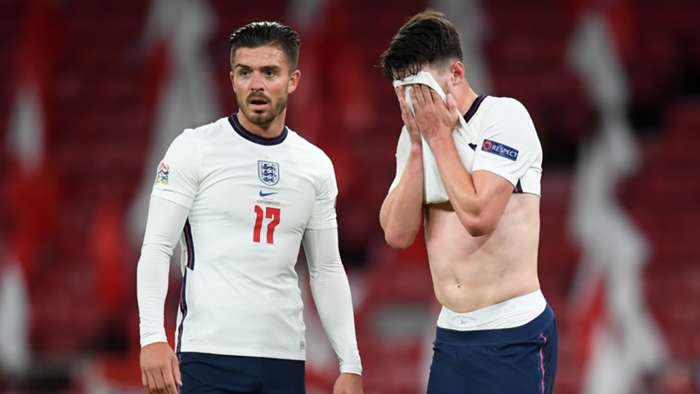 Jack Grealish has described his England debut as 'emotional' with the Aston Villa star finally pulling on a Three Lions shirt in the 0-0 draw against Denmark.

The 24-year-old came on as a 76th minute substitute for fellow debutant Kalvin Phillips as Gareth Southgate's side failed to break down a stubborn Danish defence in Copenhagan on Tuesday.

Grealish has been long-tipped to make an impact on the international scene and got his opportunity in the squad for the Iceland and Denmark matches after Marcus Rashford's withdrawal.

The Villa skipper felt it was an honour to play for his country and hoped there would be many more appearances to come.

"I was actually a bit emotional. It's something you dream of. Everyone dreams as a little kid of playing for England," Grealish told Sky Sports.

"It was such a privilege coming on and it's a shame we couldn't get the win in the end. I want to thank Gareth Southgate for giving me the opportunity and hopefully it is the first of many.

"It's my first game and I was happy with how I've done with my debut and as I say hopefully it's the first of a few. I've enjoyed every single minute. Everyone has made me feel welcome here."

Coady - who become the first Wolves player to start for England since Steve Bull in 1990 - was proud to feature for his nation for the first time.

"Immensely proud. It's a dream come true. It's incredible to play with this group of players," Coady told Sky Sports."There are world class players in this group - don't let anybody tell you otherwise.

"We're disappointed not to go away with the win but from a personal point of view I'm immensly proud.

"It's such a big moment. We found out this morning and it was an incredible feeling to see my name on the board with those players.

"I'm here to help these players and the team we're all here to improve the team. We've done alright but we wanted to come away with the win."