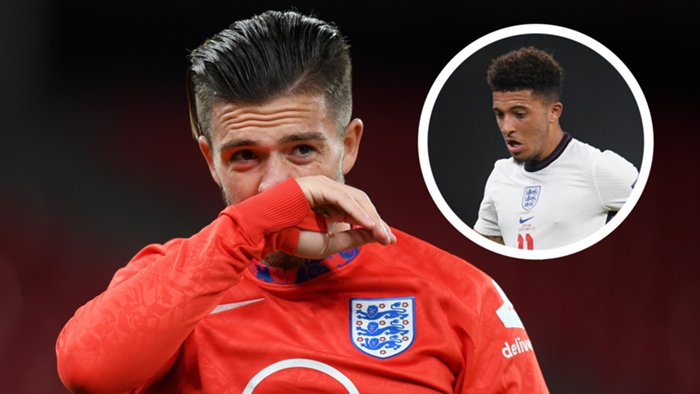 Darren Bent is surprised that Aston Villa star Jack Grealish isn't attracting more transfer interest and suggests that he would want to be in Jadon Sancho's position and have Manchester United pushing hard to sign him.

The Red Devils have been keen to bring in the 20-year-old Dortmund winger although the Bundesliga side are reluctant to see the England international leave them in the summer.

Ole Gunnar Solskjaer's side have also been linked with Villa captain Grealish, who made his Three Lions debut in the 0-0 draw with Denmark, although he doesn't appear to be high on the club's wishlist as things stand.

And Bent is surprised that one of the top clubs haven't swooped to sign the midfielder, believing that Villa would allow the 24-year-old to leave if their valuation of the player is met.

"Do I think he will leave Villa? Yes, but no one has come in and given £50 million, which has really surprised me," Bent toldGoal ahead of the return of the EFL on Quest highlights show this Saturday. "I thought straight away that it would be between three or four clubs.

"Arguably, he could get into any squad in the Premier League but no one has gone in and said 'here we go, we will take him'. It is good for Villa, we know how much he is loved there, but for Jack, is it what he wants to do?

"It is all well and good saying he has to leave to go to the next level but no one is taking him.Maybe he is best off staying, be the main man, play every week and develop. He doesn’t want to be a bit-part player.

"It is an important time for him but if he continues progressing, then I think he will be in the England squad. Jack could go to Spurs and get right in the team, make them better but he will have seen his name linked to United for some time.

"He will want that to be his next step but it is hard to get into those clubs. You need luck, ability and you need someone to really fancy signing you. Man United are battering down the door to sign Sancho and I am sure that Grealish would want it to be him.

"If a big bid came in, then I don’t think Villa would stand in his way after he has been so loyal to them."

Bent, who was at Villa when Grealish first started to break through at the club, believes the playmaker deserves to be cut some slack despite him receiving criticism for breaking UK lockdown restrictions earlier in the summer.

"We knew Jack had all the attributes," he added. "At first, he was quite quiet, laid back and shy when he came to train with us. But when he got the ball, you could see in certain movements that he was going to become a different level.

"He was brilliant in the Premier League and Championship in the last two years. It is a testament to himself because he has had a lot to deal with on and off the field. I think he is better for it. Listen, he is not the only one who has let people down.

"In the last couple of days, a couple of youngsters (Phil Foden and Mason Greenwood) have done things they shouldn’t have done so now people can’t throw it at Jack saying he can’t be trusted because he isn’t the only one.

"He has transformed from being a player from the youth system to Villa’s best player. I think it was a masterstroke from Dean Smith to give him the armband. I think ever since that Birmingham fan ran on the pitch and clocked Grealish, he has really changed and the perception of him has really changed.

"The way he dealt with that situation was superb. He could have reacted another way but he was calm, kept focused and he scored the winner in that game. He is a top player, one of England’s most creative players alongside Foden, Mason Mount and James Maddison.

"As far as his own personality, he has that bit of edge that you need to succeed at the top level. No one wants a team of quiet boys and you need a bit extra, which Jack has got.

"He needs to get his head down and not make too many more mistakes because he is on his way to the very top. Footballing-wise, he has got the lot."