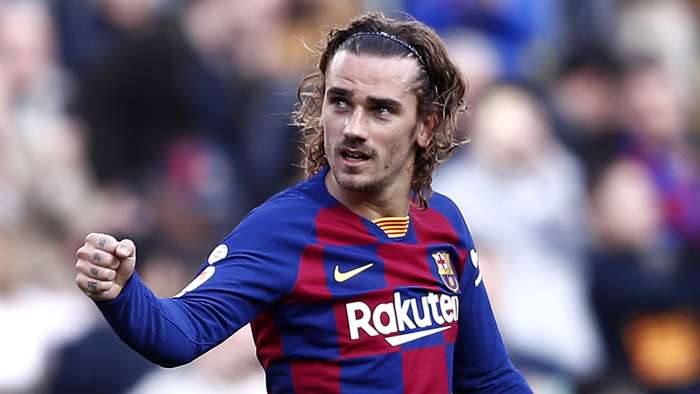 Antoine Griezmann is capable of being La Liga's top goal-scorer next season if he is played in the correct position, according to ex-Barcelona defender Andrea Orlandi.

Despite scoring 15 goals in all competitions last term, Griezmann underwhelmed for much of his first campaign at Camp Nou following his€120 million (£107m/$134m) move from Atletico Madrid.

That was illustrated by Quique Setien's decision to leave him on the bench for the entirety of Barca's 8-2 defeat at the hands of Bayern Munich in the Champions League quarter-finals.

That result marked the end of Setien's tenure in charge, with Ronald Koeman appointed to replace him.

The ex-Everton boss takes over a squad that will include Lionel Messi after the Blaugrana captain explained toGoalthat he would be remaining with the club despite telling them he wished to leave following the completion of the campaign.

It is looking increasingly likely that Luis Suarez will be leaving the club, however, with Juventus having agreed a three-year contract with the Uruguay international.

Despite that,Orlandi does not believes thatWorld Cup-winner Griezmann should step into Suarez's shoes and instead should be deployed as a No.10 behind a central striker, with both Atleti and France having benefitted from him playing such a role in the past.

"If you sign Griezmann to play left-wing, then I am surprised at the Barcelona directors for thinking his best position is to play there," Orlandi, who will be part of LaLiga TV's panel of pundits in the UK and Ireland during the upcoming season, told Goal.

"Especially when you pay that sort of money for a proven world-class player, you need to play him in his best position.

"This is what Koeman has said and this is why I think we will see the best of Antoine Griezmann next season.

"He needs to play off a striker and it could have been Suarez. We saw it in one game against Villarreal in La Liga where Barcelona played really well. Setien then changed his mind for the next two games and we didn’t see it again.

"When you buy a player of that pedigree and money, then you play him in his best position. Griezmann as aNo.10 with Messi on the right and someone up-front will benefit Barcelona.

"I don’t see him as a number nine, he needs a younger number nine to play off. He didit with Olivier Giroud, Diego Costa andFernando Torres.

"He needs that freedom to roam around the box because he is a very clever player. He will keep doing that. He just needs freedom to attack; defensively he will do the job, he will run, he was at left-back sometimes for Barcelona last season so no problem.

"He needs his best position to allow him to be the player he wants to be.

"I always say, Karim Benzema will challenge for the Pichichi (La Liga's top goal-scorer trophy),but Griezmann will be close.

"He scored 15 goals in a bad season for him. He started well but you could see he lost it and he is a player who needs to play with a smile on his face.

"We saw it with Ronaldinho back in the day:when you play without a smile, then this is when you make yourself smaller and smaller. This is what happened last season but I think he will be one of the best players next season."

Orlandi, who also representedSwansea City, Brighton and Blackpool during his playing career, spent time inside the Camp Nou dressing room with Ronaldinho as he made the step up at a similar time to Messi and Andres Iniesta.

And he looks back fondly on his time with the club despite only playing a bit-part role under Frank Rijkaard.

"It took me a while to actually enjoy being in the dressing room because when you walk in, you are more nervous than anything else," he said. "Looking back it was fantastic.

"I just remembered my first training session, turning up three hours before the time I needed to be there.

"I wanted to be the first player in there and Ronaldinho was the next to arrive. He gave me his handshake and I was so nervous, I was shaking. But once I stepped on the pitch, they made it easy for me.

"I managed to make my league debut, played some games in the cup and trainedquite regularly with them. I don’t know what Rijkaard saw in me, but he used me quite a lot in training.

"It was fantastic and I saw the beginnings of Leo Messi. I saw the best of Ronaldinhoprobably and I canalways say I played with and against Andres Iniesta in our youth career.

"I always knew he was going to be a star, but it was those years when he really started to show the player that he was.

"It was a huge honour.I just tried to keep it simple because they were the good players. I only had to do the basics and thatis what I did.