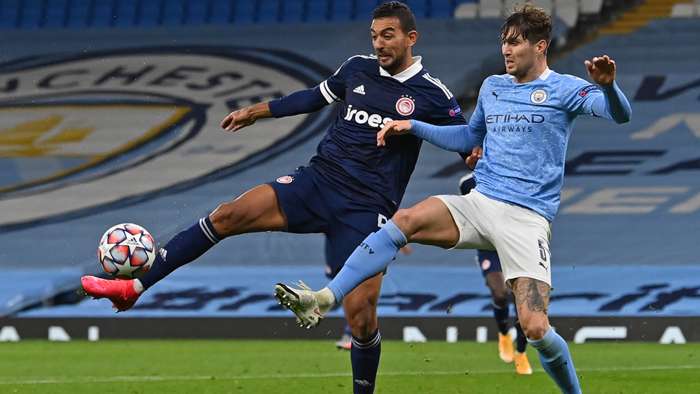 John Stones had an "almost perfect" performance as he made his first start for Manchester City in over a month, according to Pep Guardiola.

Stones partnered Nathan Ake in the centre of defence as City beat Olympiacos 3-0 at the Etihad Stadium to make it three wins from three Champions League group games this season.

Guardiola's men restricted the Greek champions to a solitary shot on target on a night when goals from Ferran Torres, Gabriel Jesus and Joao Cancelo helped City earn a comfortable three points, and Stones' display on his full return to the side delighted his coach.

"Last season we did not have enough players for competitions when we had a nightmare with injuries," Guardiola told BT Sport.

"It was really good, especially Nathan for the beginning and from John. He's back at his level with an incredible performance – almost perfect – and it is not easy when you are a long time without playing.

"I am so delighted for his mentality, he played really good."

Guardiola also welcomed the return of Jesus, who made only his second City appearance of the season when he came on as a second-half substitute.

The 23-year-old Brazil international scored within 12 minutes of his introduction to double City's lead – an intervention Guardiola picked out as the key moment of the game.

"We were exceptional first half, unfortunately we could not finish with more goals because we played really well," said Guardiola.

"In the second half we struggled for some moments but when we scored the second one the game was over. We struggled a bit to find the second goal but finally with an incredible goal from Gabriel and then from Joao, we finished the game.

"In general it's good news for him and for us that Gabriel is back. It was a real solid performance, especially in the first half, and the reason why we struggled a little bit is because we could not score the second one."