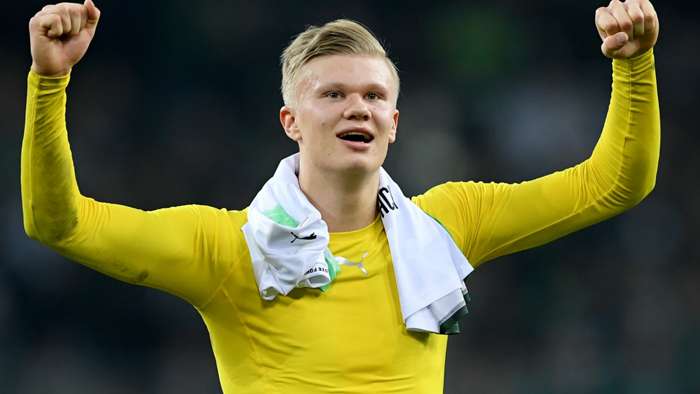 Borussia Dortmund star Erling Haaland has revealed that he'd be a "rapper or a farmer" if he wasn't a footballer and outlined his desire to be the world's best.

Six of thoseefforts came in the Champions League group stages, prompting the likes of Real Madrid, Manchester United and Juventus to show an interest in the 20-year-old.

However, Dortmund ultimately won the race for his signature, after negotiating a cut-price €20 million (£18m/$24m) deal with Salzburg days before the opening of the winter transfer window.

Haaland has since been able to transfer his form in the Austrian Bundesliga to the German equivalent, scoring 13 goals in his first 15 league outings for BVB.

The Norwegian frontman helped Lucien Favre's side finish second in the final standings behind Bayern Munich, and will be expected to pick up from where he left off when the new season begins later this month.

Asked what motivates him to get up and train every day during a Q&A session on Twitter, Haaland responded: "Just one thing... the desire to be the best!"

The former Salzburg talisman was also quizzed on what career path he would have taken had the opportunity to become a professional footballer not presented itself, to which he offered a surprising reply.

"A rapper or farmer," said Haaland.

The Dortmund striker went on to describe the experience of walking out at Westfalenstadion for the very first time, back when supporters were still allowed in stadiums prior to the coronavirus outbreak.

"As a player, I was in shock how amazing atmosphere it was at Signal Iduna Park. And the yellow wall, words can’t describe my goosebumps after my home debut," he said.

Another young player who will be looking to make an impact at Dortmund next season is Jude Bellingham, who became the world's most expensive teenager when he joined the club from Birmingham City for £25 million ($33m) earlier this summer.

The 17-year-old is determined to earn a regular place in Favre's starting XI and make his mark on Europe's biggest stage, as he told sport.de: "It was important to me, despite the long and exhausting season in the Championship, to prove myself from day one and to prove that I deserved a place. That has worked out pretty well so far.