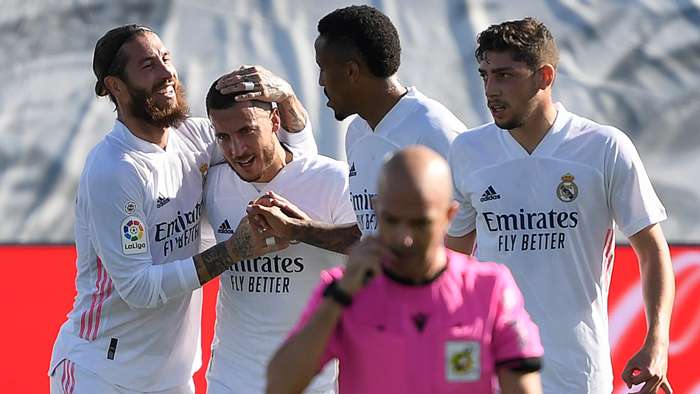 Eden Hazard was delighted to score a "beautiful goal" for Real Madrid after a year-long drought as Emilio Butragueno hailed the forward as "magnificent".

Hazard blasted home with his weaker foot from nearly 30 yards out to give the Spanish champions the lead over Huesca on Saturday.

Zinedine Zidane's men eased to a 4-1 victory that moved them back to the top of the table, with Karim Benzema scoring twice and Federico Valverde also on the scoresheet.

It was Hazard's strike that will be best remembered, though, as it ended a wait of 392 days for just his second goal for Madrid since joining from Chelsea for an initial €100 million (£88m/$112m) in 2019.

Hazard was beaming as he recorded a short video message for fans that was posted on Twitter by Madrid after the match.

"Hi, guys! I'm just happy to be back on a pitch, and score a beautiful goal," the Belgium international said.

Hazard did not create a chance for team-mates or produce a cross in his hour on the pitch against Huesca, but his link-up play with Benzema was encouraging throughout and one such move led to Valverde's emphatic third goal, leaving Zidane pleased with what he saw.

Real'sdirector of institutional relations and former star strikerButraguenowas also thrilled with the performance of the Belgium star.

"What Hazard did was magnificent. We saw that in the first goal," he told Movistar after the game. "It gives you an idea of the category of player we're talking about.

"From then on, the team felt more comfortable. Being effective up top helps the game to go how you want it to.