'He plays better than some centre-backs!' - Why Ederson and Guardiola are perfect for each other
Match

'He plays better than some centre-backs!' - Why Ederson and Guardiola are perfect for each other 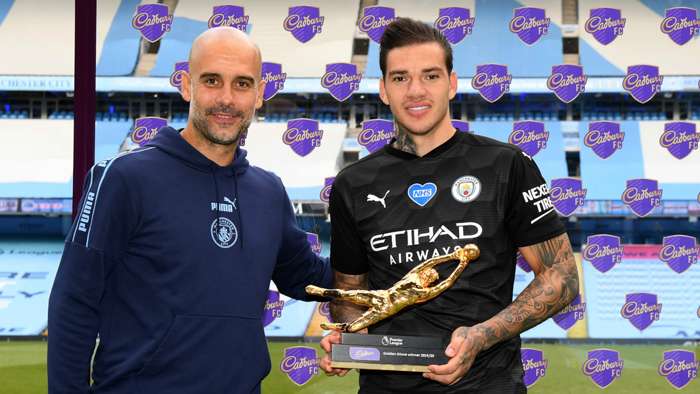 When Pep Guardiola signed the contract extension that will keep him at Manchester City until 2023, he also gave himself the task of rebuilding a squad capable of mounting atitle challenge.

Club legends Vincent Kompany and David Silva have left over the past two seasons and City have found it difficult to replace them.

Fernandinho and Sergio Aguero, at 35 and 32 respectively, are expected to follow them out of the club during Guardiola's reign and finding successors to those two will beanother daunting task.

Those are not the only changes likely to happen as Guardiola looks to revamp a squad that failed to challenge Liverpool in the Premier League last season and which have started this campaign some way short of their brilliant form in his two title-winning seasons at the Etihad Stadium.

So it will come as something of a relief that, barring an injury or alarming drop in form, goalkeeper is one position that he is unlikely to need to worry about beforehis latest deal expires.

Ederson is the undoubted No.1. He and his young family are settled and happy in Cheshireand there is no suggestion of him going anywhere. He signed a seven-year contractbefore his first season was even complete following a £35 million ($47m) from Benficain 2017.

Still only 27, he has hinted he would be happy to stay longer and the news of Guardiola’s extended stay should mean that there won’t be any upheaval soon.

The ice-cool Brazilian is in a team that suits his ball-playing strengths and ability to spot and react to danger. He is not simply relied upon to make saves.

"Ederson always had amazing skill with his feet, he plays better than some centre-backs," Benfica technical youth co-ordinator Rodrigo Magalhaes, who worked with him before his move to City told Goal.

"I can rememberan incredible pass he made in the junior championship, he playswith tranquility."

While Ederson is the perfect keeper for Guardiola, the City boss is also the perfect coach for him.

Ederson has excelledduring his three-and-a-half years with the Catalan and it’s hard to see him being quite as effective or as appreciated under any other manager.

“I feel I have developed a lot since coming here, particularly training underPep Guardiola,” he said ahead of Tuesday’s Champions League clash with Porto.

“He gets the best out of his players. My style influences the team.

“I’m a player who is looked for during the game and that is responsibility. A mistake ends in a goal, but I am ready for all circumstances.

“You have to be mentally strong. I want to continue here at City and continue getting better.”

Guardiola has already replaced one club hero in that position, when he controversially allowed Joe Hart to leave shortly after joining the club, and will be thankful he will not have to do it again.

Whilst Claudio Bravo did not work out, it was clear that the attributes Guardiolademanded from his goalkeeper were different. Being a top shot-stopper was not enough.

He requires a ball-playing No.1with the confidence to sweep behind by a high line, start attacks, stay concentrated for a possession-heavy side as well as the basic element of being able to make a save.

When Ederson arrived from Benfica, it was clear that he was the ideal answer to what Guardiola was looking for.

Starting his fourth season at the Etihad, it is difficultto consider any other goalkeeper in the world who would be a better fit for the City coach’s game plan.

Statistically, Ederson is good but his figures do not necessarily stand outconsidering his reputation.

In the Premier League this season, he averages 27 passes per match which is only the 12th most of any keeper, while for accurate long passes he is only 17th.

But his effectiveness belies simple statistics.

Ederson excels with his ability to find team-mates in space with drilled long passes or short passes that break lines or oppositionpressing.

His calmness allows him to take the ball in pressure situations to break the press and his communication with his backline can make him act more like a fifth defender.

"His game management isalways amazing,"Magalhaes added."He's a very dangerous player. He sees short, medium and long passes and is the first person to start the counter-attack.

"He has the ability to put the ball in the front with precision and accuracy and is very important for transition. And when you need to keep possession then he is there too."

There are still things that he needs to improve, which is why his healthy competition with Alisson for the Brazilstarting spot is helping both to get better.

Misjudgments, such as the poor throw in last season’s Manchester derby that gifted United a goal and the errantdecision making in the Champions League defeat to Lyon, show there is space for Ederson to get better.

But in Guardiola, he has a coach that sees the benefits of a progressive goalkeeper hugely outweighthe negatives.

“Internally we give Eddie incredible credit as a keeper,” the City boss said after he won the Golden Glove award last season.