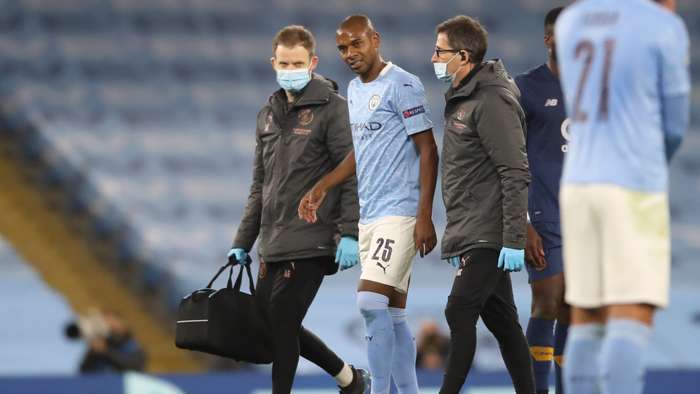 Pep Guardiola fears the worst for Fernandinho after the Brazilian star suffered an injury in Wednesday's Champions League opener.

It wasn't all positive, though, as Fernandinho, who entered the game as a substitute in the 84th minute, went off with aleg injury before the end.

The midfielder was replaced by John Stones for the final moments of Wednesday's win and, speaking after the game, Guardiola says it appears Fernandinho may be out of action for quite a while.

"Bad news, in the place he was injured before," he told the BBC. "He will be out a long time. It's happened."

He added in his post-match press conference: "Bad news, his leg will be, I think four to six weeks out, yes it is a big blow for us with these amount of games and no people there, but it is what it is."

Goals from Sergio Aguero, Ilkay Gundogan and new boy Ferran Torres led the way for City, who also sealed a 1-0 win over Arsenal in the Premier League lastweekend.

Aside from the Fernandinho injury, Guardiola was largely pleased with how things went on Wednesday asCity took care of business against Porto ahead of next week's clash with Marseille intheir secondgroup stage game.

"The last 10-15 minutes of the first half and the start of the second we played well," he told BT Sport."This is a good start for us and the next step we go to France to get the second one.

"At set pieces they were strong. By the second half we didn't concede anything set pieces or counter attacks so we controlled the game.

"Here, the Champions League is an opportunity to play five substitutions and the ones that came on made an incredible contribution. We had decided before the goal to substitute Gundogan but he scored an incredible goal.