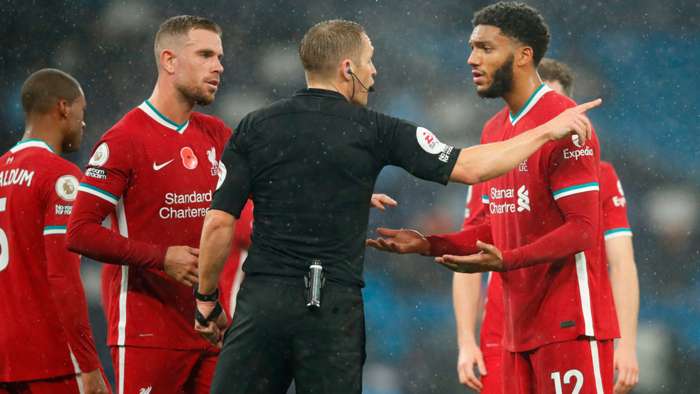 Liverpool captain Jordan Henderson criticised the “harsh” penalty given against his side during Sunday’s 1-1 draw against Manchester City.

The penalty was not initially given by referee Craig Pawson, but the official decided to point to the spot after he was advisedby the video assistant refereeto watch a replay of the incident.

A similar incident occurred during Leicester's game against Wolves earlier on Sunday, with Wanderers defender Max Kilman penalised for handball on that occasion.

Henderson admits the two incidents meanthe officials are at least consistent in their decisions, but feels the rules are unfair on defenders.

"People will say I am biased because it is against us but I saw one similar in the Leicester game. Joe is running back to his own goal, where is he going to put his arms? I think it is so difficult for defenders,” he told Sky Sports.

“I felt it was harsh but they have been pretty consistent. In the Leicester game they gave it and they gave it today but for us as players I think it is harsh.”

When asked whether the handball rule, which was tweaked at the start of the season, is clear, Henderson told BBC Sport: ”I don't think so, to be fair to the referees, the game before Leicester vsWolvesthey have been consistent with it. They are going to the letter of the law.

“For players it is harsh, I feel for defenders running back withthe pace of that Kevin De Bruyne cross, it is hard for him to get out of the way.

“Everyone is finding it difficult to know where to put their arms. Hopefully the refs can look at it and it shouldn't be given in both games."

The incident did not prove costly to Liverpool because De Bruyne sent his penalty wide of the post.

The game was tied at 1-1 at that stage after Gabriel Jesus had cancelled out Mohamed’s Salah early opener for Liverpool , with neither side able to find a winner after the break.

Henderson was happy with the Reds’ performance, but admits he is not completely satisfied with a point.

"Coming here we knew it would be difficult, City are fantastic and it was an intense game, overall we have to take the point and move on," he added.

"It is always a difficult place to come, I would have liked a winner.

"We started really well, a lot of the time we do but especially today. The work rate and intensity was really good in the game, defensively solid and so many positives in the game.

“We limited the problems they cause and hopefully after the international break we are back for another set of intense fixtures.

"Tactically we changed a little bit but not the intensity, that did not change. The front four were brilliant not only defensively but offensivelythey worked really hard too.