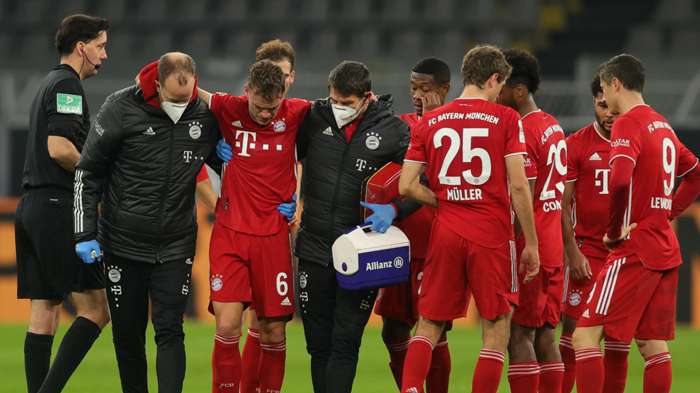 The Germany star was unable to win the ball off Haaland and fell awkwardly, sufferingwhat appeared to be a knee injury in the process.

Kimmich received treatment for a sustained period before being helped to his feet by team-mates and carried from the field of play by two of Bayern’s medical staff.

Bayern went on to win the game 3-2 to move to the top of the Bundesliga table, but the victory was soured by the injury to Kimmich.

Kimmich’s team-mate Leon Goretzkastated that he thought the German had overstretched his knee,but Flick will await scan results before talking about the player’s condition.

"Joshua will fly with us and then be examined,” Flick said. “I don't know yet and don't want to anticipate anything. We have to wait now. I am not participating in speculation.

"He's an important player for us in this position. In addition to his mentality, he also has outstanding quality. It'll be difficult, but we made it today against a good Dortmund team."

Any sustained period of absence for Kimmich would be a serious blow to Bayern, but the one positive is that the win over Dortmund was the final game before the international break and Goretzkais hopeful his team-mate will be able to shrug off the problem.

“He has a good healing power so we hope for the best,” Goretzka said, while Thomas Muller took to Twitter and called on the midfielder to “get well soon.”

Bayern are not in action again until November 21, when they entertain Werder Bremen in the Bundesliga, by which time the extent of Kimmich'sinjury will be known.

While the loss of Kimmich is a blow, Bayern dealt with his absence admirably against Dortmund.