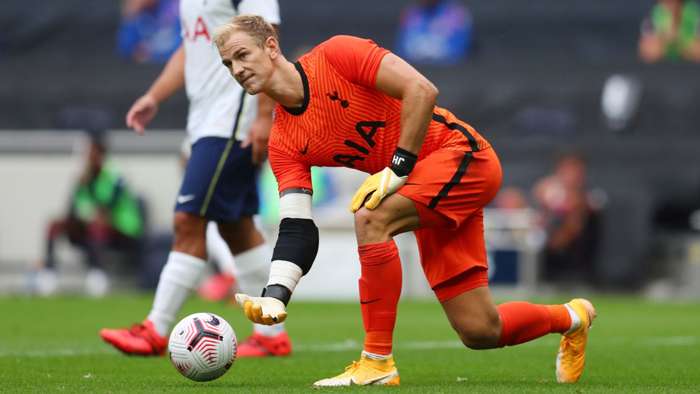 Joe Hart has insisted he is aiming to become Tottenham's No 1 while praising his "virtually faultless" team-mate Harry Kane.

The 33-year-old was once revered as one of the best goalkeepers at the Premier League, having spent the peak years of his career on Manchester City's books.

He won two league titles with the Citizens and managed to establish himself as England's first-choice goalkeeper before Pep Guardiola's arrival at Etihad Stadium in 2016.

The Spanish head coach quickly deemed Hart surplus to requirements, and he was sold to Burnley in 2018 following loan spells at Torino and West Ham.

The veteran shot-stopper was unable to get his career back on track at Turf Moor, but he believes he has plenty to offer a Tottenham side currently heading in an exciting new direction under Jose Mourinho.

"I crave football. I realised I just love being at the top. I love being around a club where you play three games a week and if you don't win it is a big deal," Hart told BBC Sport.

"I am not stupid. That opportunity was not going to come in a given number one slot. After working out what Jose wanted from his squad and what he thought I could bring to it, it matched what I thought. I haven't come to shake it up. I have come to make Tottenham better."

The former City star went on to express his admiration towards Kane, who has enjoyed a superb start to the season with five goals and eight assists recorded in six Premier League outings.

"He has always had that ability," Hart said of the Spurs captain. "I struggle to find a fault with Harry. He is absolutely brilliant. Every single pass, every single shot, every single decision.

"He is such a team player. His leadership is doing it, which is often more important than being vocal. We have seen how selfless he is. He is a special player and I love being in the same team as him."

The Tottenham keeper added on the club's chances of winning silverware in 2020-21 and his relationship with Mourinho:"We are moving in the right direction. Jose inherited a good team and he has made some shrewd additions.

"There is a big difference between saying you want to win something and showing and believing and doing the right things to put yourself in the best position to win.

"Where you want to be is when all the finals are over and the Premier League is finished, everyone can look at each other and say we left nothing out there and threw everything at it.

"Jose is very clever at how he works the media. He is a different guy in his own environment, with his own players. He asks you to give your best and show your quality. That is how I work.