'I cried on the phone, I was so amazed' - First England call-up was 'surreal' for teen sensation Hampton

'I cried on the phone, I was so amazed' - First England call-up was 'surreal' for teen sensation Hampton 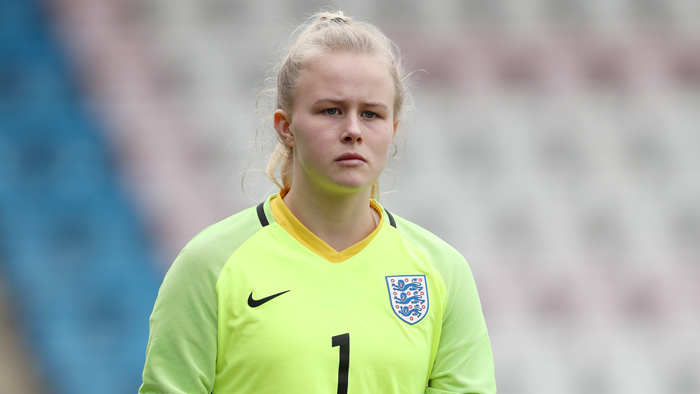 There aren’t many goalkeepers in world football who become first-team regulars before they turn 18.

Hannah Hampton was thrown in for her Birmingham City debut at the age of 16, and when first choice shot-stopper Ann-Katrin Berger left for Chelsea a few months later, she stepped up immediately with performances that defied her inexperience.

Despite being the first name on the team-sheet at an established Women’s Super League side for two full seasons now, the 19-year-old still wasn’t expecting an England call-up to come her way for a while yet.

But it was February of this year that Phil Neville first called her up to be part of his senior squad, as a training player for the SheBelieves Cup in the United States.

"I remember it like it was yesterday, it was honestly incredible,” Hampton says, recalling one of her last footballing experiences before the Covid-19 pandemic suspended her third senior season.

“I was at home packing, ready for a trip to Sunderland, and I just got a phone call off Phil, and it didn't come up with his name or anything. I just answered it going 'hello' and he was like, 'Hi, this is Phil Neville' and I'm a bit like, 'oh my goodness'.

“When he told me that I was going, I did cry on the phone, I'm not even joking, I was so amazed.

“As soon as I finished the call, I called my brother. He was at university, he was in a lecture, and I called him.

“He was saying that apparently everyone in the lecture just looked and stared at him because apparently he jumped up and screamed!

“It was quite surreal to be honest. I think I did not take a smile off my face the whole trip.

“My performances last year were nowhere near where I wanted them to be, so I got it in my head like, 'Look, it's not this season, you know you can do a lot better’,” she says, explaining why the call-up came as such a shock.

“I think the coaches knew that because they had seen me at England the whole time, like I've come through the whole age groups.

“A lot of the times on Under-21 camp, Neville would pop down, and he would look at you and watch you training. I just never thought it would ever happen.

“I thought I'd have to wait another year, maybe two. I had just got a phone call out of nowhere really, so it was incredible.”

In the States, Hampton was training with the best that England had to offer, including veteran goalkeeper Carly Telford, who she admits was something of an idol for her growing up.

“It's just one of those things where you're like, 'Oh imagine if I played for England one day’ - and you're there and you're playing with them. It was surreal,” the teenager, capped regularly at youth level for England,says.

“I do remember looking up to Carly Telford so much, just the way she -like the way she shows herself against everything, really.

“She's definitely someone that I was kind of fan-girling about, not going to lie. It was incredible. Honestly, it was amazing.

“I think being around top-end players every single day on and off the pitch you learn so much. It's always going to be a valuable experience.

“There are things that you didn't realise you needed to do. They would come along and just help you out straight away and kind of take you under their arm, just guide you around and show you the ropes.

“It's quite weird being shown around by the likes of Carly Telford and Steph Houghton, for sure. I mean, I just got used to playing against them, let alone training with them.”

That was Hampton’s last footballing experience before lockdown commenced in England, with the WSL never resuming after being suspended due to the coronavirus pandemic.

Fortunately, Birmingham just about avoided relegation when the league was decided on points-per-game, with Liverpool going down.

There were concerns about the new season for the Blues. When August arrived, they had no manager and only 10 senior players on their books.

However, the club have since appointed Carla Ward, who guided Sheffield United to a second-placed finish the Championship last term, and immediately signed three new players – including Scotland captain Rachel Corsie.

Suddenly, with Birmingham’s season starting on Sunday against Brighton, things are looking up.

“It's definitely going in the right direction,” Hampton believes.

“The defence was always quite well worked and quite together. It's just then building on that, getting the ball from the defensive areas into our attacking third and creating chances."