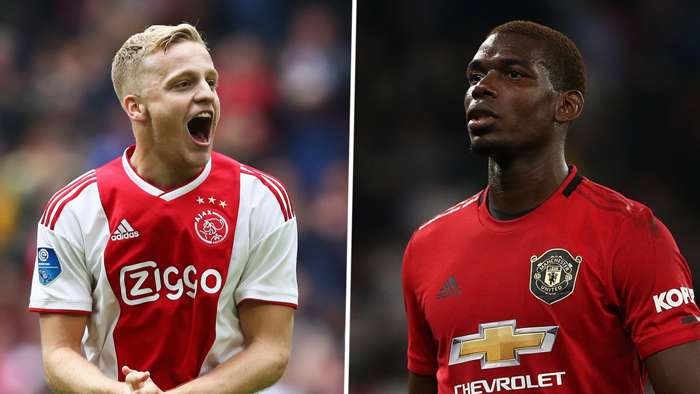 Donny van de Beek will challenge for Paul Pogba's position at Manchester United, according to Steve McClaren, who says the Frenchman could be made to pay for a lack of consistency.

The 23-year-old, who has emerged as one of the brightest young prospects in Europe over the past few years at Johan Cruyff ArenA, hadalso been linked with Real Madrid and Barcelona, but has ultimately decided to continue his devolvement in Manchester.

Van de Beek's arrival will likely see the Norwegian head coach shuffle his pack, and McClaren fearsPogba could be the man to make way for the Dutchman unless he starts proving thathe can deliver the goods week in, week out.

The former United assistant has compared Van de Beek's style of playto Chelsea legend Frank Lampard, while also praising Solskjaer for increasing competition for places heading into a crucial campaign for the club.

“Van de Beek is exactly like Frank Lampard in his heyday; he gets in the box, scores, assists, his goal record of one in three is fantastic. He’s an excellent player,"McClaren told talkSPORT.

“He’s a little bit similar to Fernandes but I think Fernandes has got that pass that, where Van de Beek is in the box Fernandes will pick him out – Manchester United didn’t have that before.

“The only one I probably fear for, and it’s a debate that’s gone for a while, is Paul Pogba. Because you can’t play Van de Beek as your controlling, holding midfield player, he’s got to be an ‘eight’ or a ‘ten’, and at the moment Pogba is the ‘eight’ and Fernandes is the ‘ten’.

“Manchester United hope to have lots of games with the Champions League, etc. and Ole knows you need a strong squad, so maybe, maybe he’s getting three of them so two can play in every game.

“But maybe because of Pogba’s inconsistencies and Ole wanting more consistency there, Ole is laying down the gauntlet for Pogba. At the moment no one is challenging Pogba in that position and Van de Beek will challenge him and challenge Fernandes.

“With Pogba, there is a great player in there but you’ve got find a way of getting it out of him in every game and across the whole 90 minutes.

“I do think Pogba has been a far better player since he’s come back. It seems that Fernandes has ignited his passion, he’s got someone he can play with and now Van de Beek is coming in too.