'I see him joining Juventus, they've got Ronaldo!' - Sagna tips Pogba for Serie A return
Match

✨ Maestro Mauri ✨ Designated Player Mauricio Pereyra has agreed to a contract extension. ???? #VamosOrlandoThe Catalan club are in need of help in the backShkodran Mustafi and ...

'I see him joining Juventus, they've got Ronaldo!' - Sagna tips Pogba for Serie A return 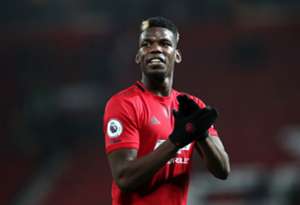 Paul Pogba is more likely to join Juventus rather than Real Madrid if he decides to leave Manchester United at the end of this season. That is the view of Bacary Sagna, the former Arsenal and Manchester City defender who was a team-mate of Pogba with the French national team between 2013 and 2016.

Speculation about the Manchester United midfielder has been rife for months, with his agent Mino Raiola admitting last year that he wanted to quit Old Trafford.

"Everyone within the club [United] from the manager to the owner knows Paul's wishes," Raiola said. "Everyone knows the willingness of Paul to move on. Everyone knows what the feelings of Paul are."

Pogba remained at Old Trafford in January, however, but has made just eight appearances this season and has not featured since Boxing Day due to an ankle injury.

It is widely expected he will again push for an exit at the end of the current campaign and Real Madrid remain favourites for his signature, mainly because of his relationship with coach Zinedine Zidane.

But speaking exclusively to Goal, Sagna says that if his countryman does leave the Premier League, his destination could be Italy, rather than Spain.

"I see more Paul returning to Juventus because Cristiano [Ronaldo] is there and because Juventus is the club that made him shine," said Sagna.

"He loves the club, he already knows it."

Pogba spent four seasons with Juventus, having moved to Turin on a free transfer from Manchester United in 2012.

He won four successive Serie A titles as well as two Coppe Italia before returning to Old Trafford in 2016 for a world record ?93.2 million (EUR110m) transfer fee, which has since been surpassed.

Pogba has won the League Cup and the Europa League, but United have been unable to mount a serious challenge for the Premier League title.

Juventus meanwhile have continued to dominate Italian football and Sagna believes Pogba could achieve far more over the next few years if he ignores Madrid's advances in favour of a return to his former club.

The 37-year-old said: "It will be tricky for him to go to Madrid now because Madrid are not doing so well and there would be big expectation on him and the Madrid team is getting old.

"Juve have bought some players like Ramsey and Cristiano. OK Cristiano is not young anymore, but he plays like a young boy and they still have a young team.

"If you think about the next two or three years, I think Juve has bigger potential than Madrid."