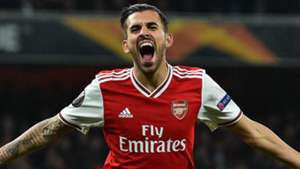 Arsenal loanee Dani Ceballos says he is uncertain about his future, but that wherever he plays next has to be somewhere where he feels "important".

The Spanish midfielder moved on a season-long deal to the Emirates Stadium from Real Madrid last summer, however his time in England has been hampered by a series of injuries.

There was talk that Ceballos's deal with Arsenal could be cut short in January, with speculation that Valencia were keen to take over his loan contact and bring him back to Spain

He has, however, recovered from his injuries and established himself in the Arsenal first team in the second half of their Premier League campaign, operating under new head coach Mikel Arteta.

That progress has been halted after the 2019-20 season was put on hold due to the outbreak of coronavirus, with top-level football having been suspended indefinitely across most of Europe.

Ceballos's loan deal with Arsenal is scheduled to end on June 30, although with the possibility that the league season could be extended beyond this point, it leaves the player in a tenuous situation.

The Spaniard wants to finish the season with the Gunners - if and when it is concluded - but refused to be drawn on where he could be playing in the future.

He told Spanish television show El Chiringuito de Jugones: "I finish my contract on June 30 but I would have to [continue to] play for Arsenal [when football returns]. I don't know how [that would work with his loan technically having finished].

"It would be irresponsible from my side to talk about my future. The most important thing will be to be important for my new team. I came to Arsenal to be an important player but in the last month that all disappeared [due to coronavirus stopping football]."

On whether he could have left Arsenal in January, he said: "Yes, my agent told me about the interest of other teams but I did not play because I was coming back from injury.

"I started training and changed my situation. In the last month-and-a-half I felt important. I knew about Valencia's interest."

The 23-year-old has made 14 Premier League appearances so far for Arsenal, claiming two assists. He is, however, yet to register a goal in the competition.