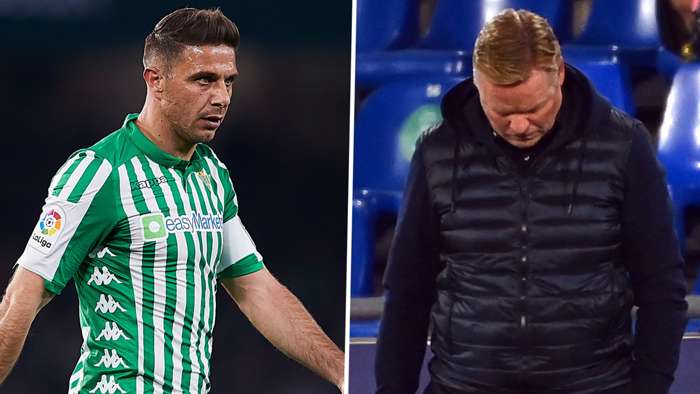 Barcelona boss Ronald Koeman has been slammed by former Spain star Joaquin once again, with the Real Betis icon saying he would not appoint the Dutchman as kitman if handed the reins of any given club.

Joaquin, for all of his obvious quality, endured a forgettable spell working under Koeman during his time at Valencia.

The 39-year-old is still going strong back at Betis, with a trip to Camp Nou next on the agenda for him, but he is not about to forgive and forget when it comes to grievances from his past.

Joaquin butted heads with Koeman on a regular basis during his spell at Mestalla and is still irked by events that happened outside of his control.

“It was not the most beautiful experience of my sportingcareer,” Joaquin told El Larguero.

“It was not a pleasant experience, but as I always say: one has to live with everything and what happened at that time.

“I do not want to talk about this issue because honestly it hurts me what happened there, I had a bad time.”

Koeman spent less than six months in the hot seat at Valencia, with the Liga giants quickly disposing of his services.

He has gone on to spend time with AZ, Feyenoord, Southampton, Everton and the Netherlands national team before returning to familiar surroundings in Catalunya.

Joaquin is baffled as to how Koeman has landed such a high-profile post at Barca, with the Spaniard admitting that he would never consider hiring the Dutchman if he were ever to become president at Betis.

“Not even as kitman!” was Joaquin’s blunt response when thequestion was put to him.

The two men will, however, see their respective paths cross in La Liga on Saturday.

Barca have been struggling to find a spark of late, while Betis are also finding consistency hard to come by, and Joaquin says both he and Koeman will have more pressing concerns this weekend than trying to rebuild bridges that were burned a long time ago.

He added: “I turned the page, we told each other everything.

“Fortunately, it did not last long and we were able to save the year by ending as well as possible because the year was complicated.