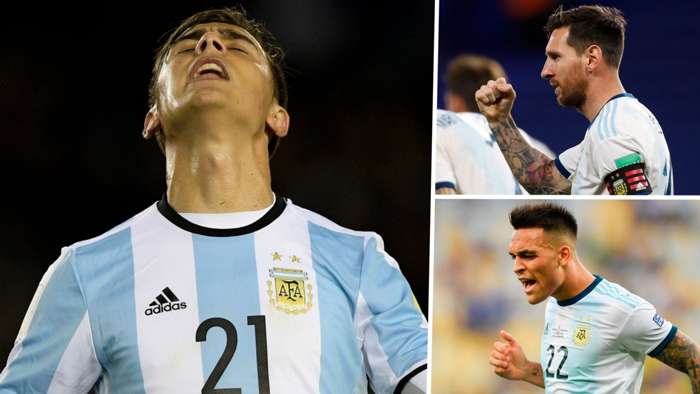 Five years and one month have passed since Paulo Dybala took his first steps with the Argentina national team, coming off the bench during a World Cup qualifier against Paraguay.

However, the following years have been little short of a disaster for Dybala at international level.

Since his debut, the former Instituto and Palermo gem has managed a mere 29 caps, with only 15 as a starter.

Even more worryingly, he has scored just twice for the Albiceleste, against a largely second-string Mexico side back in 2018, and in last year's Copa America third-place play-off with Chile.

To put that in context, Inter's Lautaro Martinez, who made his international debut two years ago, has already racked up 10 goals in 19 caps.

Perhaps most damning of all is the fact that only twice in his entire Argentina career has Dybala played the whole 90 minutes of a game – and not once in a competitive fixture.

And it is safe to say that two consecutive withdrawals through illness will not do anything to advance the playmaker's cause as a legitimate, long-term option for coach Lionel Scaloni.

Dybala was initially expected to be available for October's meeting with Bolivia, having missed his side's turgid 1-0 defeat of Ecuador, but the same stomach complaint that had ruled him out of the opening game of Argentina's World Cup qualifying campaign, in Buenos Aires, ultimately prevented him from making the trip to La Paz five days later.

Nobody other than Dybala and the Albiceleste medical staff can say whether he could have faced Bolivia, of course.

However, for a nation which prides itself on the commitment players show to its colours and their willingness to play through the pain – typified by Diego Maradona's heroic presence at the 1990 World Cup while nursing a crippling ankle injury that caused the joint to balloon in size – it was not a decision that endeared him to supporters.

Argentina's subsequent victory did not do his future international prospects any favours either. Dybala may have just made the Goal 50 for his fine form for Juventus last season but many of his compatriots are losing patience with him.

“We are waiting for Dybala to appear and start playing in the national team. How old is he, 25?” Albiceleste legend Claudio Caniggia asked on Fox Sports back in April.

“He is a great player and I'm sure he's a great kid. He plays with the 10 on his back at Juventus. He needs to step up. Let three or four step up and the rest will follow. I say this in the kindest way possible.”

The good news for Argentina is that others have begun to step up.

Messi may not have found the net against Bolivia but the Barcelona captain put aside his club strife to turn in the kind of all-action, energetic performance one does not always expect of him, particularly 3,600 metres above sea level.

Martinez, meanwhile, continued his brilliant international form by scoring one goal and laying on another to lead the comeback in La Paz, while Sevilla winger Lucas Ocampos was a constant threat across both qualifiers.

Both men, ably assisted by midfield duo Leandro Paredes and Rodrigo De Paul further back, have shown that they can shine for their country.

More importantly, they have also demonstrated that they do not just gel with Messi, but also have the ability to take the pressure off the captain's shoulders and assume responsibility for both creating and finishing chances – Martinez's strike against Bolivia, incredibly, was the first netted in a qualifier by an Argentina player other than Messi for nearly four years.

Dybala has patently struggled in both areas, memorably stating in 2017 that “it is a little difficult to play with Messi”– words which have been used, out of context, by his detractors as a stick with which to beat the forward.

He will not have the chance to redeem himself in this month's qualifiers against Paraguay and Peru either, having pulled out of the squad again, this time with mysterious“general genito-urinary symptoms that require rest and further analysis”, as the Argentina Twitter account put it on Sunday night.

It is an affliction that, curiously, did not prevent him from playing the final 20 minutes of Juventus' draw with Lazio on the same day, and did not elicit any comment from coach Andrea Pirlo afterwards.

However, the harsh truth is that Dybala will barely be missed as Argentina look to maintain their 100 per cent start, particularly in the light of Angel Di Maria's return to the fold.

Messi, Martinez and Ocampos are the trio that appear set to take Scaloni's men forward down the road to Qatar 2022, leaving the Juve star as the odd man out, unable to play alongside Leo and, on the evidence so far, equally incapable of taking his place as the player Argentina turn to for inspiration.