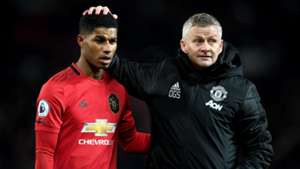 The mental impact of not playing during the Covid-19 pandemic may do more damage than the physical impact, Manchester United's former sport psychologist has warned.

United players have been training at home for three weeks due to government advice regarding the Coronavirus pandemic. Players from all teams and age groups have been given individual programmes and remain in regular contact with manager Ole Gunnar Solskjaer during the lockdown over their progression.

But with no concrete date for the return of games, some players will find it difficult to remain focused and motivated with no end goal to work towards. Bill Beswick, who was the club psychologist from 1999 to 2001, thinks footballers will find it harder to adapt than other athletes.

"It's more dangerous for footballers than most sports. Most of the Olympic athletes I work with and the rugby players are very much self management athletes," Beswick told Goal. "They're encouraged by their clubs to self-manage. So, they have that mindset and character to get on with it. Football players traditionally have been managed exclusively and told not to think."

United players have been given the same level of support they would normally receive at the club's Carrington training base and Beswick, who now works with rugby players and British Swimming through his company Sportsmind, thinks players need to use the same mentality they would use if they were a substitute.

"It's similar to being on the bench during the game. You don't know if, or when you're coming on but you need to be ready," he explained. "The current United manager, Solskjaer, was famous for being ready to come on at any stage of the game, even the 87th minute, because he kept himself ready for 86 minutes waiting for the moment."

Beswick praised the Norwegian for his mentality having worked with the forward during his spell at United.

"Solskjaer was one I worked with closely and I was very impressed with his mindset, he's an impressive man who is doing a good job," the 74-year-old said.

United had originally pencilled in a return to training date of April 10 but with everything up in the air and the country on lockdown that's been postponed indefinitely. It brings challenges for the players and Beswick, who joined United after the treble winning season before leaving with Steve McClaren in 2001, thinks they need to be disciplined and use the break as an opportunity to learn a new skill.

"This situation is a challenge and usually challenges bring the best and the worst out of people you either sink as a victim or you respond as a fighter," he said.