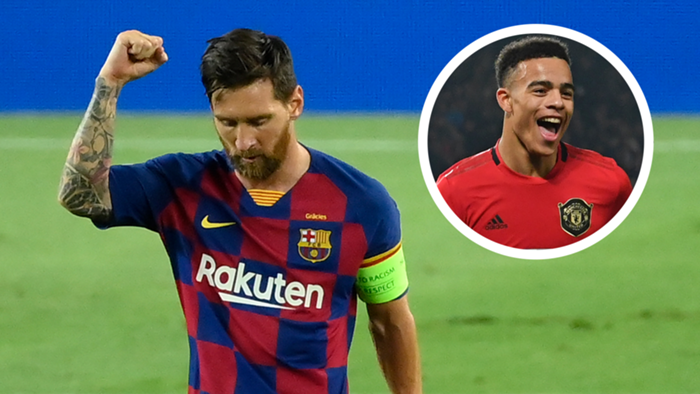 Manchester United youngster Mason Greenwood would relish having Lionel Messi in the Premier League – even if that means facing the six-time Ballon d'Or winner in Manchester City colours.

Greenwood, who is in line for his first senior England action in the forthcoming Nations League matchesagainst Iceland and Denmark, is excited by the prospect, even if it would be so beneficial to Manchester United's crosstown rivals Manchester City.

"Obviously it'd be amazing to come up against him. All young footballers know about Messi," the 18-year-old told a video news conference from England's St George's Park base.

"To be on the same pitch playing against him would be another dream come true - not just for me, for everyone.

"Having someone that high profile coming to the Premier League would be a big thing."

Greenwood's club captain Harry Maguire is absent from England duty after he was arrested while on holiday in Greece and convicted of aggravated assault, before securing a retrial after the verdict was quashed.

"It's really not for me to say, but Harry's a good lad and I'm looking forward to seeing him back at the club after this international break." he said.

In the meantime, Greenwood will vie for a place in Gareth Southgate's forward line and he is unfazed by competing with the likes of skipper Harry Kane, Raheem Sterling and prospective United target Jadon Sancho.

"I feel ready to compete with anyone," he added. "Like in the league, just going out there with a smile on your face and playing football is what it's all about.

"It's good that everyone is pushing for places. It makes the training and the games better.