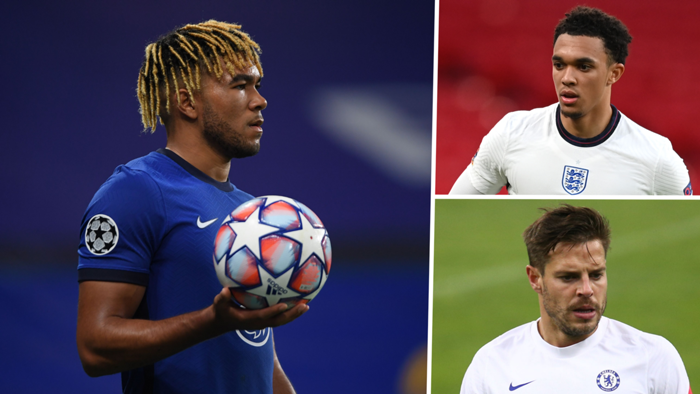 Reece James is a hard man to shift.

However, he was so enthused by what he saw from James on his international debut that he decided to retain his services for the Three Lions' Nations League double-header.

The Chelsea defender rewarded that show of faith by impressing off the bench in the win over Belgium before turning in a Man of the Match-winning display against Denmark.

The one negative, though, was James picking up a red card for dissent after the full-time whistle had blown on a 1-0 defeat that resulted in a two-game ban.

Consequently, speculation was rife that Southgate, who has been rocked by one case of ill-discipline after another in recent months, would leave James out of his latest squad, given the 20-year-old would only be eligible for the friendly with Ireland, anyway.

However, despite competition from the likes of Manchester United's Aaron Wan-Bissaka and Brighton's Tariq Lamptey, James has retained his place in the squad.

He could even start against the Irish at Wembley on Thursday night, especially as first-choice right-back Trent Alexander-Arnold has been ruled out action for the next month.

Those that know James are not in the least bit surprised that he is quickly making himself indispensable for club and country.

He first came to Southgate's attention during an excellent season-long loan spell at Wigan Athleticin 2018-19, with James winning the Latics' Player of the Year award and earning inclusion in the Championship Team of the Season.

It was notjust his form on the field that stood out, either. Cedric Kipre was at Wigan at the same time as James and was taken aback by the youngster's professionalism and maturity.

"I have nothing but good things to say about Reece," the West Brom defender tells Goal. "Some young people can arrive on loan from big clubs and act like stars. He was not like that.

"He gave everything during the training sessions and he listened to what everyone had to say.

"He's a great player but he also has the right attitude. He's very professional and I think he can have a beautiful career."

At Chelsea, they never had any doubts about that. Even at a club renowned for producing top young talent, James and fellow England international Mason Mount stood out.

Chelsea academy coach Sam Page says the pair were considered an example to follow at Cobham because of their dedication to their craft.

"I remember when Reece and Mason were working on their technical skills on a weekly basis," he tells Goal.

"On top of their natural talent, the effort they put in was an example to others. They showed what was required in order to make that journey to senior level.

"It is great to have role models for our younger players and Reece and Mason have sent a clear message that hard work does pay off.

"So, it is no surprise to us that those players are now doing great things."

James had to wait a little longer than Mount, and fellow academy graduates such as Tammy Abraham, Fikayo Tomori and Callum Hudson-Odoi, to break into the England squad, given the depth of Southgate's options at right-back.

"He is on a position on the pitch where there’s intense competition from players who are playing at Champions League level, never mind just Premier League level," the England boss pointed out last month.

"We are really blessed in this country in terms of right-backs, but James is the mix."

Indeed, James is this season proving himself one of the most balanced full-backs in the Premier League.

Glen Johnson even believes that it isnow "a toss-up between Alexander-Arnold and Reece" for England's best right-back.

"It depends on who you’re playing against of course, but I think Reece James is a better defender," the former England, Liverpool and Chelsea right-back told compare.bet. "I think he’s quicker, stronger."

James' offensive game is also improving. Only Everton's Lucas Digne has made more successful crosses (10) this season than James (nine), who has also created nine chances, scored one goal and racked up one assist.

It is hardly surprising, then, that James is presently keeping Cesar Azpilicueta out of Chelsea's starting line-up.

Both he and Ben Chilwell on the opposite flank are providing the kind of width that manager Frank Lampard has long desired, with his full-backs now regularly bypassing the midfield to support the forwards, in much the same way that Andy Robertson and Alexander-Arnold operate at Liverpool.

Of course, making England's right-back berth his own will not be easy. However, Alexander-Arnold will be wary of the Chelsea ace starting while he's out injured.