AC Milan forward Zlatan Ibrahimovic warned his team-mates they could not afford to rest on their laurels after seeing the Serie A winter champions collapse to a 3-0 defeat at ho...

Manchester City avoidedbeing on the receiving end of what would have been thegreatest shock in FA Cup history thanks to one man – Phil Foden.The significance of defeat would hav...

Manchester City manager Pep Guardiola has insisted he did not have any regrets over his team selection against Cheltenham, even when City were trailingin the second half to the ... 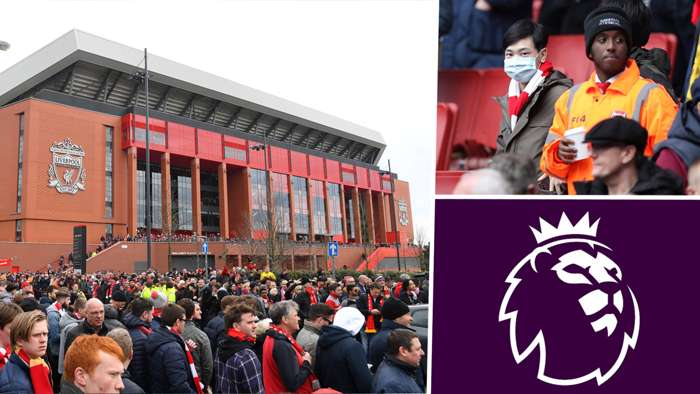 Liverpool, Arsenal and Chelseaare among the Premier League clubs that will have the opportunity to welcome back fans from next week, after the government announced the latest coronavirus tier system.

With Manchester having been placed in tier 3, however, Manchester United and Manchester City will not yet be given the green light to allow fans back in.

The same rule has been applied to other areas of the country, affecting Wolves, Newcastle, Leeds, West Bromwich Albion,Sheffield United, Leicester and Burnley, who will also not be allowed to open their stadiums for supporters at this moment in time.

Prime Minister Boris Johnson had announced on Monday that a maximum of 4,000 fans would be allowed in to football matches in England, should the stadiums be in towns and cities that are in tier 1 of the government's tier system.

That does not, however, apply to any Premier League clubs, with Thursday's tier update stating that onlyCornwall, the Isles of Scilly and the Isle of Wight are currently in that threshold.

Of the 10 top-flight stadiums that fall under tier 2 restrictions, a maximum of2,000 fansor 50 per cent of their capacity -whichever is lower -will be allowed to attend fixtures from December 2, when the national lockdown ends.

Despite the announcement, it is unclear at this stageexactly how many of the 10 Premier League clubs will attempt to allow in supporters at the next opportunity, with Arsenal being the first to be able to welcome back fans with their Europa League clash againstRapid Vienna on December 3.

As for some ofthe other clubs, their first chance to allow up to 2,000fans back in will be the 11th round of league fixtures beginning on December 5.

The north London derby, due to take place the Tottenham Hotspur Stadium,falls on that weekend, while Liverpool face Wolves at Anfield, Chelsea host Leeds United and Manchester United travel to the London Stadium to face West Ham.

Many of England's top-flight clubs have expressed their optimism at the proposed welcoming back of supporters to grounds, with Liverpool having released the following statement on Tuesday: "Liverpool Football Club welcomes the government's announcement regarding the proposed return of fans into sports stadia.

"We have greatly missed our supporters at Anfield and we look forward to welcoming them back when it is safe to do so.

"We will continue to work with our city partners, including Liverpool City Council, Merseyside Police and Spirit of Shankly, in order to establish the most up-to-date health guidance and the most effective process for the safe return of supporters.