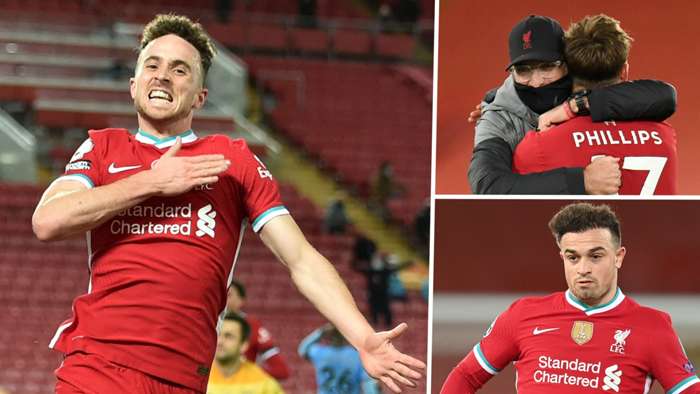 The cast changes, but the story doesn’t.

Liverpool carry on, and there’s still no harder place to go in football than Fortress Anfield.

That’s 63 league games unbeaten now for the Premier League champions, who equalled a club record with the hardest of hard-fought 2-1 wins over a spirited West Ham on Saturday evening.

It took a couple of substitutes to do the business for Jurgen Klopp’s side, who were some way away from the best. But with one gorgeous Xherdan Shaqiri pass, and the calmest of finishes from Diogo Jota, what had gone before was washed away.

They’re not sparkling, but this is what Liverpool have now – game-changers in reserve. If Mo Salah and Sadio Mane can’t break down the door, then Klopp can turn to his bench and know there is quality to come on.

He needed that quality here. Liverpool were toiling when Jota and Shaqiri were summoned, 20 minutes from time. They’d trailed to Pablo Fornals’ opener, levelling through Mohamed Salah, who won and converted a penalty just before half-time.

But with West Ham resolute and well-organised, and happy to sit off and play on the counter, something new was needed.

Roberto Firmino was struggling again, and 19-year-old Curtis Jones was not providing the kind of creativity we know he can from that advanced midfield spot. Mane and Salah were quiet, too, while even the full-backs, Andy Robertson and Trent Alexander-Arnold were off the pace.

Enter the Swiss and the Portuguese.

Jota had already had one goal ruled out, correctly, for a foul by Mane on Lukasz Fabianski, the West Ham keeper, but the £45 million ($58m) man was not to be denied his big moment. His fourth Liverpool goal arrived soon after, as he collected the cutest of passes from Shaqiri to run clear and slot home.

What a happy knack the former Wolves man has of scoring goals when his side need him to. That’s four now for Jota, in just nine appearances. All of them have come at Anfield, and all of them have been significant. The 23-year-old looks like money well spent.

Klopp may also breathe a sigh of relief that Shaqiri was unable to find a move in the summer, too. Having been one of the few players to rise above mediocre in the Champions League win over Midtjylland in midweek, he delivered another timely reminder of his guile and technique here. Few would have even seen the pass he found for the winner, let alone been able to execute it.

With Firmino struggling, there must be a case for Liverpool bringing one or both into their starting line-up, whether for the trip to Atalanta on Tuesday, or perhaps even the visit to Manchester City next weekend.

That fixture will challenge Klopp’s side, who will need to play better than they did here, for sure. They will also need a couple of players back available, particular in defence and midfield.

They can take encouragement from the performance of Nat Phillips, who excelled on his Premier League debut at centre-back, but Joel Matip’s return would be welcome. That's 15 goals conceded in seven league games this season – not since Sheffield Wednesday in 1928-29 has a side won the top-flight in England having started with such a record.

The return of Thiago Alcantara in midfield would surely help, mind. Liverpool had more than enough of the ball here– Jordan Henderson alone completed 133 passes – but needed someone to quicken the tempo. Until Shaqiri, they had nobody.

Those, though, are issues for another day. For today, the Reds can reflect on three more points that put them back on top of the Premier League table.