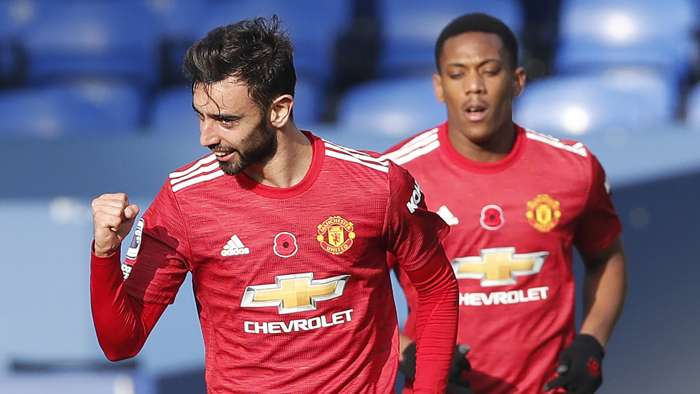 Manchester United are on their best away run in the Premier League in 27 years after the 3-1 win at Everton on Saturday.

While the Red Devils' inconsistent start to the 2020-21 campaign has seen the Norwegian manager come under pressure, United fans can have no qualms about their domestic record on the road.

They have now won their last seven away games in the English top flight, and according to Opta Sports it istheir best run since August in 1993. The Old Trafford side went on to win the league that season under Sir Alex Ferguson.

It is the third time in a row they have fought back from a goal down to win away in the Premier League this season. They are just the third team to go on such a run after Leeds, who did so in 1999, and Tottenham under Andre Villas-Boas in December 2013.

Saturday's victory was United's 17th at Goodison Park in the league - no other away team has won as many at a specific stadium in the division.

After his double, Fernandes has now been involved in 15 goals in 10 matches on the road, having scored 10 and assisted another five - more than any other Premier League player has had a hand in. The last player to score 10 in as many games away from home was Kevin Phillips back in 1999 with Sunderland.

After a strong start to the campaign, Everton are now without a win in four Premier League matches and have now lost three in a row.

Not since his days in charge of AC Milan in 2006 has coach Carlo Ancelotti been defeated three times in a row in the league. The Rossoneri finished fourth in the table that year, 36 points behind the champions.