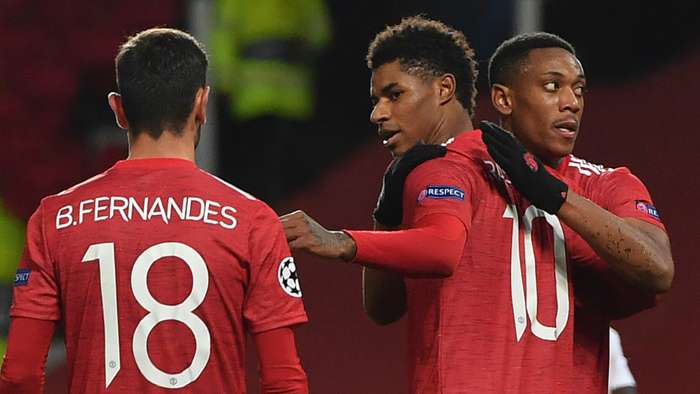 Ole Gunnar Solskjaer has explained why Marcus Rashford was not given the chance to complete his hat-trick when Manchester United were awarded a penalty against RB Leipzig.

Rashford scored three goals in a memorable cameo from the bench, while Mason Greenwood and Anthony Martial also got in on the act as the Red Devils moved top of Group H by three points.

Martial notched the home side's fourth goal from the penalty spot after being fouled in the area, but Rashford initially placed the ball down as he chased the first senior hat-trick of his career.

Although the England international usually shares duties from 12 yards with Paul Pogba, he was asked to step aside so that Martial could score his first goal of the 2020-21 campaign.

Solskjaer says it was pre-arranged for Martial or Pogba to take any penalties in United's latest European outing, with Rashford not given a look in because he wasn't selected in the initial starting XI.

"Before the game, I said Anthonywas going to take that penalty and that's it," the Norwegian boss said post-match. "If you look at the starting squad it was either Antho' or Paul Pogba to take it and Paul was taken off."

Rashford ultimately had no issue with letting Martial step up to the plate, as he told BT Sport:"I feel confident with Anthony taking them as well. So no problem."

The 22-year-old still managed to complete his treble in the dying moments of the game, with Martial setting him up neatly to fire past the hapless Leipzig goalkeeper Peter Gulacsi once again.

Rashford also revealed that Solskjaer had instructed him to inject a fresh sparkinto United's attack when he was brought on for Greenwood in the 63rd minute, with the German outfit leaving plenty of gaps open in the final third as they stuck to a high pressing game plan.

"I think the manager wanted me to up the tempo. That for us means going forward," he told reporters after the game. "There were definitely spaces there. We got Bruno Fernandes and Paul Pogba on the ball. We looked dangerous throughout and that we could score every time we went forward."