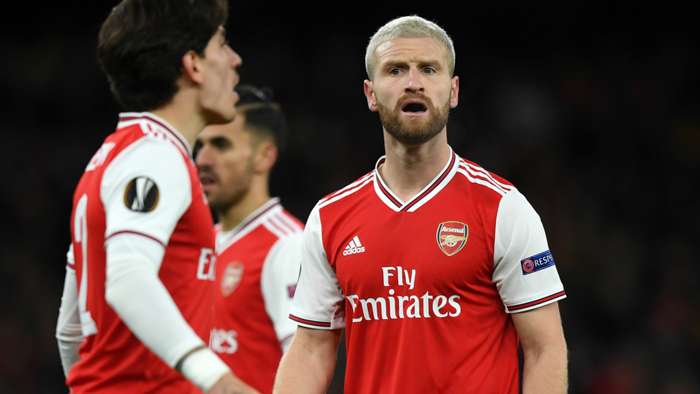 Arsenal’s squad trimming has continued, with Shkodran Mustafi joining Schalke on a deal until the end of the season.

Mesut Ozil has been the highest-profile departure, with the former Germany international joining Fenerbahce and in so doing the club cleared a sizeable chunk of wages from the monthly bill.

Sokratis Papastathopoulos joined Olympiakos earlier this month after being released from his contract, William Saliba, Sead Kolasinac and Matt Smith have left on loan, whileMatt Macey joined Hibernian on a permanent basis.

World Cup winner Mustafi emerged as a possible departure towards the end of January, and he was linked with a shock move to Liverpool.

Mustafi was reportedly considered, but Reds boss Jurgen Klopp turned his attentions to Preston’s Ben Davies and this allowed Mustafi to thrash out a deal with Schalke.

Speaking on deadline day, Arteta said: “We have decided who could leave today and we are working on it.

“You will find out before 11pm. I cannot speak about any individual players. What we want to do, the conversations we've had, the various reasons - let's see if we can get something done tonight."

Mustafi was one of those given the green light to move on, and Gunners great Paul Merson is happy to have seen him leave the club.

When asked if Arsenal could afford to let Mustafi go, Merson said on Sky Sports: “Yeah and he'll keep that record going at Schalke.”

Merson was speaking in reference to Schalke being in dire relegation trouble.

Schalke will hope Mustafi can prove Merson wrong, as they are in need of a defensive boost.

After a torrid first half of the Bundesliga season, Schalke are rooted to the foot of the table.

They have won just one game so far this season, and have eight points to their name.

Schalke are nine points behind Arminia Bielefeld, who occupy the relegation play-off spot in the Bundesliga, and have moved for experienced heads to help their cause.