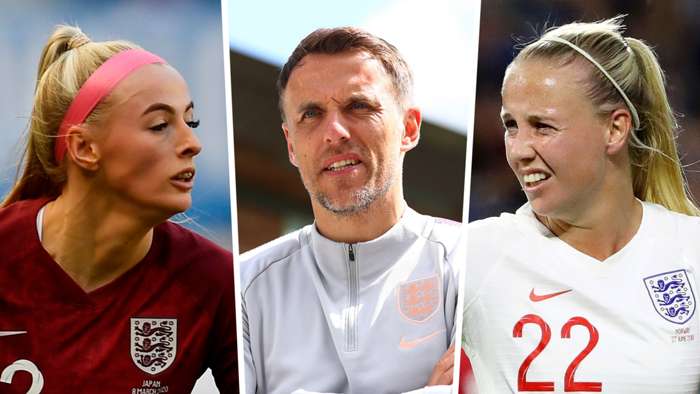 When Phil Neville leaves his role as England head coach next summer, there will be varied opinions about whether or not his tenure was successful and whether this team has improved since he came in.

That was highlighted again this week in England’s first training camp since the SheBelieves Cup back in March, with nine uncapped talents brought into St George’s Park.

During an in-house friendly on Friday night, it was those new recruits who stole the show.

Chelsea’s 21-year-old forward Niamh Charles was the best player on the pitch, despite playing out of position as a right-back.

Sandy MacIver, Everton’s 22-year-old goalkeeper, made a number of fantastic saves as she kept a clean sheet for the winning XI.

In front of MacIver was Grace Fisk, West Ham’s 22-year-old defender, who had a classy game alongside the first of 14 players to be given a senior debut by Neville, Abbie McManus.

Off the bench, Ella Toone got on the scoresheet, the 21-year-old Manchester United midfielder scoring with a superb header in the second half, while Lotte Wubben-Moy and Rinsola Babajide – aged 21 and 22 respectively – also had impressive cameos.

“It’s very exciting for young players at the moment,” Chloe Kelly, who was given her senior debut back in November 2018 at the age of 20, said.

“We’re getting the opportunity to show what we’re capable of and really perform on the big stage.”

The average age of the players on this camp was just under 25 years old, but it’s nothing new under Neville. As his tenure has unfolded, a number of his key players have been the younger ones.

Keira Walsh was given her debut just before Neville came in, but the 23-year-old has become one of the first names on the teamsheet under the former Manchester United defender.

Beth Mead was the third player Neville handed a maiden cap to, and she has since become a force to be reckoned with for England on the left wing, scoring eight goals in 25 games.

The likes of Kelly, Leah Williamson, Georgia Stanway, Ellie Roebuck and Lauren Hemp – all likely to be stalwarts in this team for the next decade – are more examples of Neville trusting young players.

Hemp was given her first start earlier this year against the world champions, the United States, aged just 19. She was the best player on the pitch for England.

“I think that is part of what I am. Whichever team I manage, I will give opportunities to young players,” Neville said.

“What you’ve seen tonight is a set of young players that have come in and looked like they are ready to perform. That is massively exciting.

“The difficulty now will be reducing the squad from 30 to 23 or whatever we have to do when we start playing games.

“But it’s a great problem to have and what I will say is that over the last three days, there’s probably two or three of them that have jumped ahead in terms of my thought process of when we’re going to expose them over the next three camps.”

Of course, these players would have earned chances under other managers too. After all, when they are performing so well at club level, you cannot ignore them.

But it’s clear that Neville has had a real impact on the youngsters in the squad, so much so that they play with real freedom and a lack of fear when given a chance, as was seen in Hemp’s full debut back in the United States in March.

The Manchester City winger had her first exposure to the England senior set-up in early 2019, when, at 18 years old, she went to the SheBelieves Cup as a training player.

“Phil and Bev Priestmann, assistant were really supportive of me,” she told Goal earlier this year, reflecting on that experience.

“They helped me, really encouraged me to be the best that I can be and each week they’re messaging me, giving me new things to work on and in training.

“When I was away with the seniors, they were always pushing us and trying to make us better.

Whatever one might think about Neville as England boss, the fact is that when Sarina Wiegman replaces him in July 2021, she will inherit a young, exciting team that is bursting with potential.