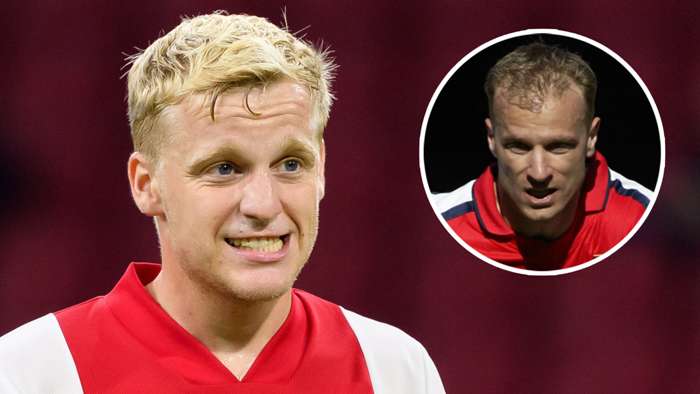 New Manchester United signing Donny van de Beek has revealed the advice he is being given by Premier League legend - and the father of his girlfriend - Dennis Bergkamp after he completed his£35 million ($46m) transferto Old Trafford.

The 23-year-old has completed his long-awaited move to English football after impressing at Ajax, and has the perfect source for advice in dealing with his new league in the form of Bergkamp, who thrilled fans in the late 1990s and early 2000s with his performances for Arsenal.

The central midfielder revealed Bergkamp - father of his partner Estelle - told him to enjoy the fast-paced, attacking football which is the signature of the Premier League, while also warning him to be prepared for a more physical battle than the one he will have been used to in the Eredivisie.

Van de Beek told De Telegraaf :"My father in law Dennis Bergkamp obviously played for another club, but he's a legend in England and knows exactly how it all goes in the Premier League. He keeps telling me that it's incrediblyfun and also very tough to play there. I'm going to prepare myself for that."

United will hope van de Beek can bring an added edge and dynamism to a strong looking midfield, which also features talents like Paul Pogba, Bruno Fernandes and Nemanja Matic.

Van de Beek cannot wait for the challenge of trying to establish himself at Old Traffordand revealed what that he hopes to provide a source of goals and assists, while also explaining how he covers a lot of ground during matches.

He told the club's officialwebsite : "If you know me and the kind of football player I am,my style and everything, then I think I can have a good combination with the club and the players also. If you look at the players the club has, they are young players, the same age like me and I cannot wait to play with them.